What: After a rough September, investors in the small-cap biotech Theravance Biopharma (NASDAQ:TBPH) were treated to an extremely profitable month, as the company saw its shares soar more than 53% higher during the month. 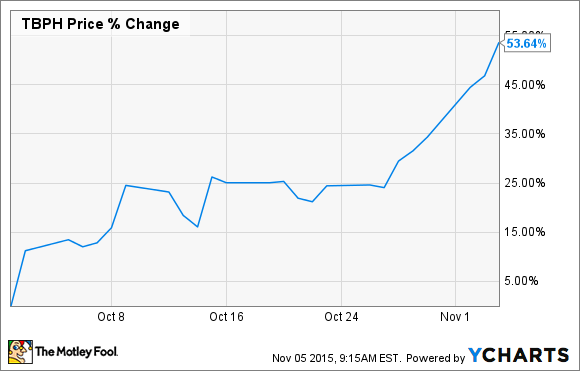 So what: The company released a slew of positive news during the month that appears to have been meaningful enough to many investors' theses to boost up share price substantially.

First off, the company released good looking clinical data from a retrospective study of Vibativ, its approved injectable antibiotic. The study found that patients who used Vibativ showed cure or improvement rates of 79.4% in bacteremia and 88.9% in osteomyelitis. The company plans to use this data in order to expand the future labeling for Vibativ. If those efforts prove successful it could go a long way toward boosting sales.

Next, the company submitted an investigational new drug application to the FDA to begin research on TD-0714, which the company believes could be used to treat a variety of cardiovascular and renal diseases, which include acute and chronic heart failure, hypertension, and chronic kidney diseases. Phase 1 trails are expected to begin this quarter.

Both of these announcements sent the company's shares higher, and management took advantage by selling 3.8 million shares for $14.25 each through a private offering. That pricing appears to be advantageous for the company, as the $14.25 was a higher price than its shares closed at on the day that the capital raise was announced.

Finally, Theravance announced that it initiated a Phase 2a trial of its experimental drug TD-6450 as a potential treatment for Hepatitis C. Along with its partner, Trek Therapeutics, the company is experimenting with this compound ability to treat genotype 4 of the Hepatitis C virus. If all goes well in this trial, the company could initiate late-stage clinical trials in Egypt next year.

Now what: The news here looked good all around, so it's no surprise to see that the market was bidding up shares so much during the month.

If you were bullish on the future of Theravance Biopharma before the month began, you probably felt even better about the company's future after reading up on these announcements, so I see no reason to change your stance now.