What: It's been a tough year for shareholders of Keryx Biopharmaceuticals (NASDAQ:KERX), as shares of the renal disease focused drug developer have done nothing but go down since start of the year. However, shares roared back to life in October, and the stock was up more than 40% during the month after the company made a handful of announcements that appear to have put the company back on track. 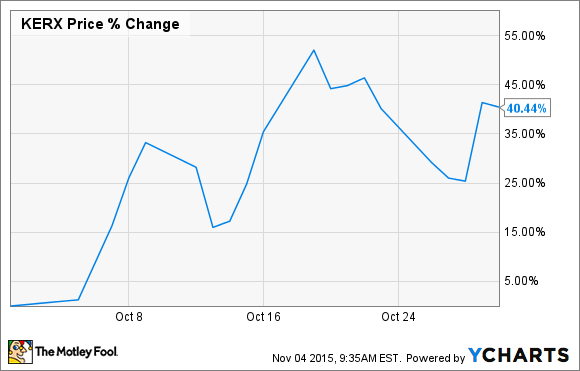 So what: The company made two announcements during the month that contributed meaningfully to the business.

First off, the company raised $125 million from a zero-coupon convertible notes offering from its largest shareholder, the Baupost Group, that matures in October 2020. Those notes retain the option of being converted into common shares at a price of $3.74 per share. The offering boosted Keryx's cash position up to approximately $225 million. At the same time, the company announced that it would be implementing a cost-reduction strategy that would lower its operating costs in 2016 to between $87 million and $92 million. When combined with the expected up-tick in sales, the company now believes it has everything it needs to reach operating break-even.

Secondly, the company announced its third-quarter earnings during the month. Reported revenue of $4.2 million came in well ahead of the $3.8 million that analysts were expecting. The beat was largely driven by a strong 45% growth in script volume for Auryxia, the company's only approved drug, which helps regulate serum phosphorus levels in patients on dialysis. This gives some credence to management's previous claims that reimbursement was a major barrier to a fast ramp for the drug.

The capital infusion combined with strong growth for Auryxia appears to have sent the company's detractors racing to cover their huge short position, which helped to skyrocket the share price.

Now what: While it's always great to see a struggling company have a good month, investors are not out of the woods yet. Still, there is plenty of reason to be encouraged. Data showed that patient adherence to Auryxia was very strong, and most of the patients who discontinued use did so because of cost concerns. With the company continuing to invest in reimbursement access, that problem could continue to diminish over time.

On the demand side, Keryx now expects to have its sales force expansion completed by the end of the year, which should help to keep Auryxia script volume moving in the right direction. In addition, the company will be displaying three posters at American Society of Nephrology meeting later this month that could also help to convince reluctant physicians to give Auryxia a try.

Down the road, clinical work to expand Auryxia's labeling in the U.S. continues to progress, and the company expects to announce a partner for its European approval soon. Both of these events could prove to be meaningful catalysts for the company's shares in the future.

All in all, it was a great month for Keryx's long suffering bulls, so if the company truly has finally turned the corner then shareholders could be in a position to have a wonderful 2016 and beyond.