What: Shares of eBay (NASDAQ:EBAY) climbed 14.2 in the month of October, according to S&P Capital IQ data, driven by the e-commerce specialist's better-than-expected third-quarter results. And shares have continued to climb since then, putting eBay stock up more than 23% year to date: 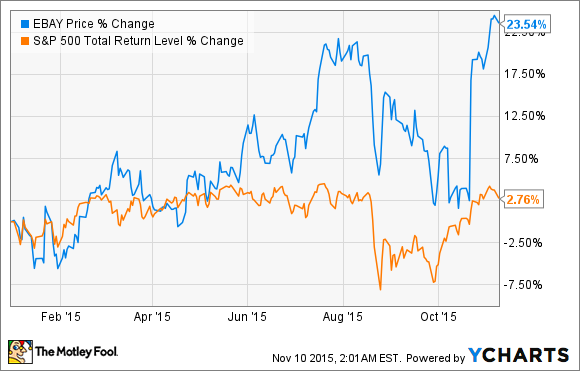 So what: To be fair, eBay's results didn't look great at first glance. Revenue fell 2% year over year to $2.1 billion, while adjusted net income from continuing operations (excluding results from eBay Enterprise, the sale of which was approved just prior to last quarter's report) declined 9% to $529 million. Meanwhile, adjusted earnings per share declined slightly less thanks to share repurchases over the past year, down 6% to $0.43.

Keep in mind, however, this was eBay's first quarterly report since officially separating from its faster-growing subsidiary PayPal (NASDAQ:PYPL) in mid-July. In addition, eBay's own guidance called for a steeper revenue decline in the range of 4% to 2% and lower earnings per share of $0.38 to $0.40. Finally, note currency headwinds played a significant role in holding back growth; excluding currencies, revenue was up 5%.

Similarly, eBay's gross merchandise volume also fell 2% to $19.6 billion and would have climbed 6% on a currency-neutral basis. That included 3% gross merchandise growth in the U.S. and 7% currency-neutral growth overseas. For a more appropriate signal of eBay's strength, note its active buyer base increased a solid 5% year over year to 159 million.

Now what: eBay CEO Devin Wenig rightly described his company's results as "solid," noting progress toward sustained long-term growth was made even as eBay navigated a time- and resource-intensive business separation. Of course, it also helped that eBay reiterated its full-year guidance for currency-neutral revenue growth of 3% to 5% and simultaneously increased its full-year guidance for adjusted earnings per share to a range of $1.80 to $1.82 -- up from the previous range of $1.72 to $1.77.

In the end, while eBay investors should continue to watch for signs of continued progress in the coming quarters, there simply wasn't much not to like about its first report apart from PayPal. It should come as no surprise, then, that the market responded by so aggressively bidding up eBay stock last month.