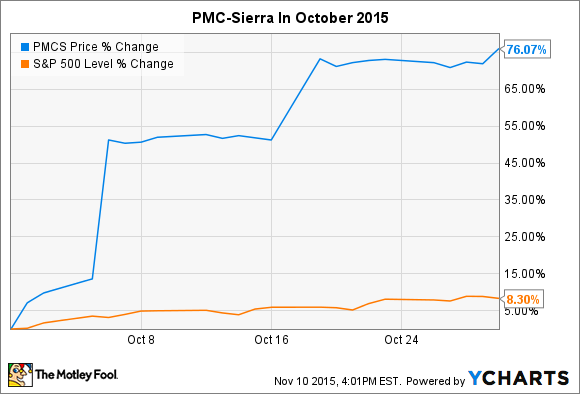 What: Shares of PMC-Sierra (NASDAQ: PMCS) gained 75.9% in October, according to data from S&P Capital IQ. The designer of semiconductors, software, and integrated modules that help device builders move large amounts of data is a buyout target right now.

So what: More than that, actually; PMC is in the midst of an honest-to-goodness bidding war, as Skyworks Solutions (NASDAQ:SWKS) and Microsemi (NASDAQ:MSCC) fight to gain the company's hand in metaphoric matrimony.

Now what: You can play along at home by following PMC's share price jumps in the preceding chart:

That was the end of October, but not the end of the bidding action. PMC affirmed its commitment to Skyworks on Nov. 1, citing the greater certainty of an all-cash agreement compared to Microsemi's partly share-based offer.

Oh, but that's not all. On Nov. 10, Microsemi shortened the timetable for its deal while keeping all other terms the same, and now claims that PMC's board has notified Skyworks that it wants to go with the new Microsemi offer.

And the beat goes on: Skyworks is sure to respond to Microsemi's latest gambit, and PMC-Sierra's future is still up in the air. But in the meantime, the battle of bids lifted PMC's shares by 76% in October (while Microsemi gained 10% and Skyworks shares fell 8%).