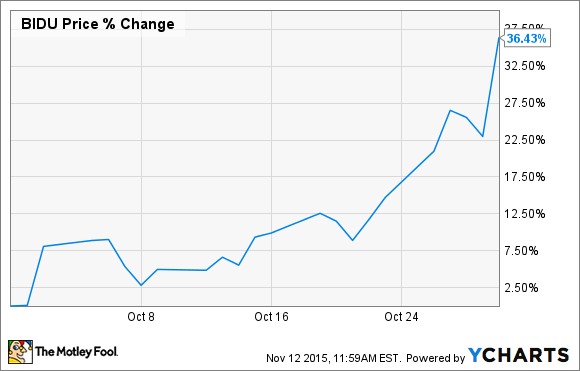 What: Shares of Baidu (NASDAQ:BIDU) surged 36.4% last month, according to S&P Capital IQ data. The Chinese Internet titan saw its stock rise steadily throughout the month, culminating in a sharp earnings related pop near month's end.

So what: Going into October, investor sentiment regarding Chinese stocks was at a low. Baidu's stock price reflected this, with shares beginning the month down about 45% from their 52-week high. However, as fears regarding an outright collapse of China's stock markets lessened and optimism that new stimulus measures would help recharge the slowing Chinese economy started to build, Baidu's stock began to recover.

On Oct. 26, Baidu's shares received a boost after the company announced that it would be acquiring a 25% stake in Ctrip.com International (NASDAQ:TCOM), a leading Chinese online travel company, as part of a share swap. Baidu and Ctrip also agreed to a "business cooperation across a broad base of products and services," which likely helped to ease investors' concerns regarding stiffening competition in the Chinese travel industry.

And on Oct. 29, Baidu's third-quarter earnings report added fuel to the fire, as Baidu's stock popped nearly 11% on better-than-expected profits and the announcement of a new $2 billion share repurchase program.

Now what:  Even as Baidu's heavy investments in its mobile and online-to-offline initiatives continue to take a toll on its margins, investors appear heartened by the Internet giant's strong revenue growth and promises that the spending will eventually lead to substantial profits. With Baidu's dominance in search cemented, and the growth of e-commerce in China still in its early innings, investors may wish to consider giving Baidu's management the benefit of the doubt in that regard.