What: Shares of childhood educator K12 Inc(NYSE:LRN) were sent to the principal's office last month, falling 22% according to data from S&P Capital IQ. As the chart below shows, the stock skidded late in the month following an unimpressive earnings report. 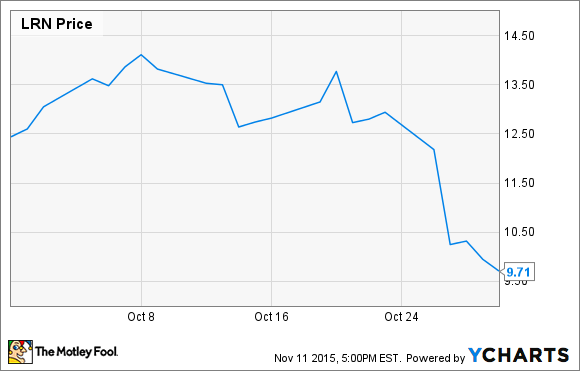 So what: The school-aged curriculum provider posted first quarter revenue of $221.2 million, down 6% from a year ago, but that drop was largely due to the Agora Cyber School's shift from a managed curriculum to a non-managed curriculum. More importantly, K12 posted a loss of $0.34 per share for the summer months, which are typically loss-generating for the company, worse than an expected $0.30 shortfall. Another warning sign was that overall enrollment fell by about 7,000 in the quarter, or 5%.

As the for-profit college industry has crumbled, pressure on K12 stock has increased, and the stock now trades at an all-time low. What was once a high-growth company is on the decline as skepticism about for-profit education has spread quickly.

Now what: Revenue growth at K12 has flatlined, and even after lapping the Agora shift next year, analysts are only expecting a 4% increase in sales. The decline in K12 stock has made its valuation much more reasonable at a price-to-earnings around 15 times, but the company will need to show it can deliver profitable growth before shares move higher. Revenue guidance for the next quarter at $205 to $215 million is in line with expectations, but it remains unclear how management plans to return the company to growth. Earnings per share are expected to fall by more than half, in part due to the loss of Agora as a managed program, but that was because the school did not make adequate yearly progress according to No Child Left Behind.

As the government continues to crack down on underperforming for-profit schools, the potential for another such development remains. Until K12 can reassure investors that its schools are delivering positive results, the company is unlikely to find significant growth, and the stock will remain mired in the single digits.