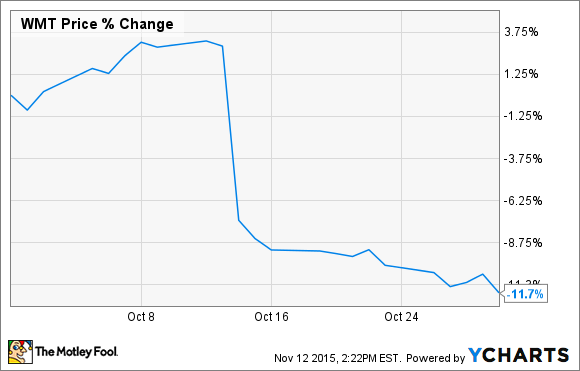 What: Shares of Wal-Mart (NYSE:WMT) fell 11.7% last month, according to S&P Capital IQ data. The retail giant is facing rising labor costs and declining profits, as well as concerns that the company's current struggles could be a sign of more to come.

So what: During Wal-Mart's investor day meeting on Oct. 14, management warned that higher wages, price cuts, and investments in e-commerce would lower earnings by as much as 12% in fiscal 2017.  As one of the companies most exposed to the "Living Wage" movement, Wal-Mart has felt pressure to raise its pays for store employees.

The company also faces intense competition from the e-commerce space, as well as dollar stores, discount chains, and grocery stores, all of which continue to make it difficult for Wal-Mart to raise prices.

Management believes its investments in its people will help to improve customer service and the overall in-store shopping experience. It also hopes that its e-commerce initiatives will allow the company to "build deep digital relationships with customers".

Investors, however, were unimpressed -- even the announcement of a $20 billion share repurchase program wasn't enough to stem a 10% drop on the day of the investor meeting -- the largest one-day decline for Wal-Mart's stock in 25 years.

Now what: While it will be interesting to see how management's new strategy will play out, the core problem continues to be that Wal-Mart, like other primarily brick-and-mortar retailers, finds itself on the wrong side of a powerful trend: the relentless growth of e-commerce. Juggernauts like Amazon continue to take share from less innovative rivals, and that's a trend that's likely to continue for the foreseeable future. Even after this decline, Wal-Mart's stock may still be a riskier investment than many investors currently believe.