More and more, machines are communicating with each other. Whether it's creating smart cities, increasing energy efficiency, or boosting productivity; the applications for the rapidly evolving market are considerable. Consequently, recognizing where the investment opportunities lie can be daunting. Forging ahead, though, we find two companies that deal in the Internet of Things: Eaton Corp plc (NYSE: ETN) and ABB Ltd. (ADR) (NYSE: ABB), both of which deserve consideration for investment. Let's see which one of the two has the edge over the other.

In the two corners
ABB, a company focused on power and automation, applies its IoT solutions in several different ways: the industrial Internet, data centers, and smart grids, cities, and homes. The company's Aspect Objects Technology is one example of an industrial operations solution -- a solution that, according to the company, "integrates automation, information, and collaborative business processes across the enterprise." In terms of data centers, ABB sees ample opportunity for its IoT solutions: Off-site data storage and process, plus the growth of software as a service companies, are leading to substantial growth of the cloud.

For this market, the company provides its Decathlon solution, which management contends provides "coordinated controls to securely automate and manage a flexible network of power, cooling, and IT systems for maximum reliability, energy efficiency, and optimal utilization of all data center assets."

Lastly, ABB's solutions extend to the rapidly changing energy environment, where the company is helping to facilitate the development of smart cities, microgrids, and smart buildings and homes.

Five divisions comprise ABB's overall business operations. Of these, the IoT touches upon four of them: power systems, discrete automation and motion, low voltage products, and process automation. It's impossible to tease out exactly how much the IoT specifically contributes to each division's revenues. However, in its most recent quarterly report, management contended that the outlook on long-term demand is positive for its three major customer sectors: utilities, industry, and transport & infrastructure. And, it identifies the IoT as a "key driver" in helping to provide various benefits for these customers. Widespread adoption of the IoT will certainly help to turn around ABB's lackluster revenues, and industry experts believe that this adoption will come sooner rather than later.

Eaton Corp., though not as diverse as ABB in its IoT offerings, does provide a number of products and solutions, many of which exist as a result of its acquisition of Cooper Industries.

It's not just the grid that Eaton can help to operate smarter: The company can also help buildings to operate be smarter. The company's Metalux Encounter and SkyRidge integrated lighting solutions can switch on and off based on occupancy and dim automatically depending on available daylight.

Representing 34% of Eaton's $5.2 billion in revenue for the recently completed quarter, electrical products is the company's largest operating segment -- it was also the most profitable. The segment had an operating margin of 19% (excluding net restructuring impact) -- an improvement of 100 basis points over the same period last year. It appears that Eaton is already benefiting from its IoT offerings, but this should just be the beginning. Eaton's building automation business, for example, has plenty of room to grow. Navigant Research estimates the commercial building automation market will exceed $86 billion in annual revenue by 2023.

Tale of the tape
It's been a rough year for both ABB and Eaton, but that doesn't have much bearing on the long-term potential. Is the market overreacting, or is it justified in sending shares down by more than 20% this year? Let's take a look. 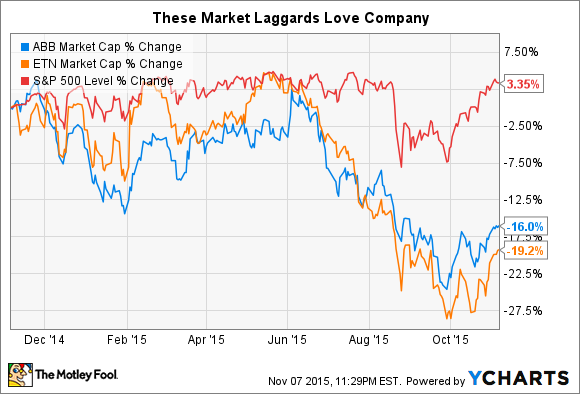 ABB and Eaton have reported decreases throughout the year, though both companies emphasize the negative impacts of foreign currency translation. Eaton attributes 6% of the decline in revenue during the first nine months of 2015 to the strong dollar and only 1% to a decrease in organic sales. ABB credits the negative currency translation impact on revenues of 10% for the same period.

So, what does this all boil down to? Looking at operating EPS, Eaton, not unexpectedly, takes round three of the showdown. Despite a rough comp quarter over quarter, Eaton has been successful at growing profits throughout the year. Granted, ABB has also recognized improvements on its bottom line -- but not as much as Eaton.

Both ABB and Eaton are committed to returning capital to shareholders. Announcing a $4 billion share-buyback program in September 2014, ABB has repurchased about $1.8 billion in stock so far. Eaton bought back $284 million in stock during the third quarter of 2015 and $454 million year to date. But shareholders often are more interested in receiving dividends in lieu of share-buyback programs. Here again, Eaton is more attractive. It also seems like a more advantageous play, with its consistently growing dividend and better cash flow. 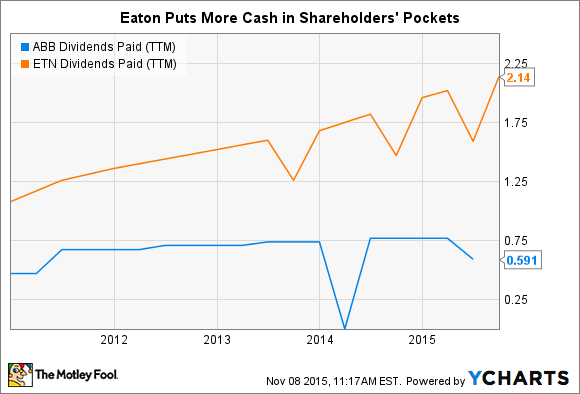 The takeaway
What's an IoT-interested investor to do? It's readily apparent that Eaton Corp.'s appeal far outweighs that of ABB. Although ABB is very clear about how committed it is to deriving value from the development of the IoT market in the years to come. At the moment, Eaton seems like the better approach -- not to mention, currently, Eaton's trailing-12-month P/E is just over 13.2 while ABB sports one around 17.9. Perhaps, in time, ABB's commitment will be rewarded, but only time will tell.

This is just the beginning, though. Take a closer look if either of these companies seem like a worthy investment.