In 1998, a 20-something mutual fund manager by the name Ryan Jacobs put up one of the best records in mutual fund history, earning his investors 196% in a single year, topping the S&P 500 Index by 167 percentage points.

The very next year, investors would saddle him with 20 times more capital just as the dot-com bubble came crashing down. The fund is still around today, though it only manages a tenth of what it used to. It, like many other funds, had a near-death experience during the implosion of the first tech bubble.

Today, similar stories of immediate riches are luring more capital into hot tech companies. But unlike the tech bubble of the late 1990s, today's rocketing Internet companies -- so-called "unicorns" -- are more likely to stay private, rather than go public. Private capital from venture capital funds can support their growth without requiring public disclosure.

Uber has already proven to be a money-raising machine, drawing $8.2 billion in 13 rounds, giving it a valuation that reportedly exceeds $60 billion. For the record, that's 1,000 times higher than its 2011 valuation.

Characterizing the ride-sharing company's fundraising as private may be a bit of a stretch, however. Increasingly, average investors are grabbing a stake in America's hottest tech companies through everyday mutual funds you might find in a retirement account.

Fund company John Hancock reports that some of its funds hold stakes in three household names: Uber, Pinterest, and daily fantasy site DraftKings. Its Mid Cap Stock Fund, which ordinarily invests in companies in the Mid Cap 400 Index, had 2.5% of its assets invested in Uber as of Aug. 31, 2015. That makes it the single largest position in the fund's portfolio.

It isn't the only fund to invest in hot dot-coms or phone applications. In fact, it purchased its $16 million stake (now valued at $38 million) in June 2014 as part of a fundraising round led by mutual fund manager Fidelity Investments. 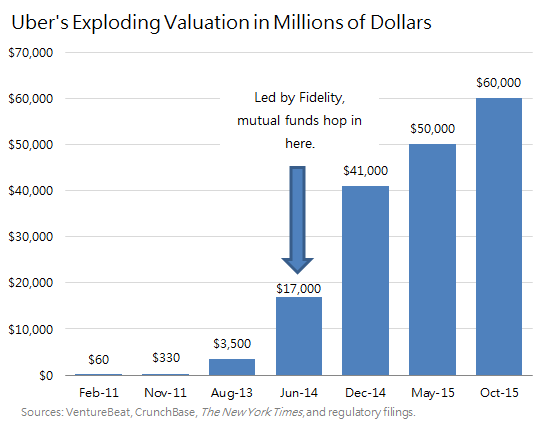 Vanguard, better known for indexing than stock picking and certainly not known for its venture capital prowess, is also in on the trend. Its U.S. Growth Fund holds similar stakes in Pinterest, Uber, WeWork, and Airbnb, though none of its private stakes appear in its top 25 holdings. Hartford Growth Opportunities carries Uber as its 10-largest investment, currently making up 1.8% of its investment portfolio.

There are limits to how much a mutual fund can invest in private companies. After all, mutual funds must invest primarily in liquid securities to meet investor redemption requests, something venture capital funds don't have to deal with. John Hancock's U.S. Growth Fund notes in its prospectus that it won't invest more than 10% of its capital in "hybrid securities," a bucket into which its private Silicon Valley investments fall. The 1940 Act, which governs mutual funds, limits stakes in illiquid securities to 15% of a fund's holdings.

But as mutual funds play an increasingly important role in financing fast-growing start-ups, it adds more fuel to the thought that this really is the dot com bubble 2.0. By purchasing a small part of a hot company, dedicating perhaps as little as 1% of a fund's assets to any one position, fund managers have the opportunity to buffer their performance if it all works out, while risking an amount that will go unnoticed by most investors if it doesn't go to plan. It also allows fast-growing tech companies to notch another round with a ballooning valuation.

Fund managers will soon file their quarterly and annual reports, which are commonly delivered to investors in manila envelopes before being promptly discarded. But this year you might want to give your fund a look-see. You might have a small claim to some of the hottest companies in Silicon Valley.