Online accounting and tax software provider Intuit (NASDAQ:INTU) files its fiscal first-quarter 2016 earnings on Thursday after the markets close, and it's probable that investors will pay a little more attention than usual to results. Last quarter's earnings, issued on Aug. 20, sent the company's stock into a very un-Intuit like decline of more than 22% in the three trading sessions following the report. You have to go back 15 years to find this kind of volatility in Intuit's price chart: 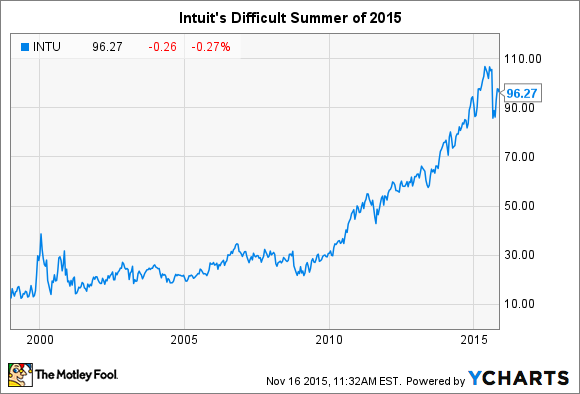 Intuit's stock plunged because of a wide miss of its own revenue guidance issued in the third quarter. The company recorded $696 million in quarterly sales, versus the $720 million to $745 million management had told investors to expect. Compounding stockholders' misgivings, the company announced alongside its earnings release that it would divest itself of three revenue streams worth about $250 million annually: Quicken, QuickBase, and Demandforce.

While none of these three products can realistically be thought of as a core offering, Quicken has remained one of Intuit's best-known brands. It's true that Intuit's future lies in promoting its cloud-based "QuickBooks Online," or QBO, product, as well as continuing to widen its TurboTax customer base. Nonetheless, investors were taken aback by the decision to sell the popular, if dated, Quicken business -- especially in a quarter in which expected revenue didn't materialize.

What investors would like to see
With a new fiscal year Intuit can make a clean start, and the best way to do so is to avoid disappointing investors with results that fall short of its own forecast. So let's review what management has laid out for this quarter:

Presumably, the company will post numbers that fall in (or exceed) the stated ranges. For whatever this tidbit is worth, management didn't make any changes to its guidance during its annual investor day on Sept. 17.

Watching the QBO growth curve
As with every recent Intuit earnings report, investors will want to glance at both U.S. and international subscriber growth in QBO. The company is gradually transitioning U.S. desktop customers of its legacy Quickbooks product to its cloud offering, while attracting hordes of first-time international users. Last year, Intuit expanded its QBO subscriber base by over 57%.

Intuit will measure the first quarter's progress against a baseline of 739,000 total QBO customers, including 103,000 non-U.S. customers, which it boasted at the end of Q1 2015. In that quarter, the company reported a 43% overall subscription improvement, and a 170% gain in non-U.S. subscriptions.

It's unlikely that this quarter's expansion will match last year's fervid pace, but shareholders should compare the change with the three-year compounded annual subscriber growth rates, or CAGRs, highlighted by Intuit management at the company's investor day in September. Those growth rates were 34% and 124% for U.S. and non-U.S. subscribers, respectively. It's reasonable to expect that Intuit will beat these averages in this first period of 2016.

Checking in on operating margin
There's at least one other major metric to keep an eye on when Intuit reports. After an accounting change and an impairment charge last year brought 2015's operating margin down to 17.6%, Intuit will try to lift operating profits back to the level of roughly 30%, which it hit in the preceding two years. Management has forecasted an operating margin of between 27% and 30% for fiscal 2016, aiming to put a year of transition behind the company. Investors as well hope this earnings report will bring a return to Intuit's normal operating margin, as well as other baseline metrics -- starting with improved revenue growth.