What: Shares of Clovis Oncology (NASDAQ:CLVS), a clinical-stage biopharma with a focus on lung cancer, are getting beat up once again today -- its stock is down more than 10% after it was downgraded by two different analysts.

So what: Given the disappointing news related to the company's experimental lung cancer drug yesterday, Clovis caught two downgrades today. First up was from WallachBeth Capital, who moved the firm from a Buy to a Hold and slashed its price target from $134 all the way to down to $30. Next up was Goldman Sachs, who also removed the firm's Buy and instead listed the stock as Neutral. It too lowered its price target for Clovis substantially from $123 all the way down to $23.

Now what: It's been a rough week for Clovis investors, as shares had now shed more than 74% of their value in the last two days. Huge stock movements like this tend to be the primary cause of investors swearing off the entire biotech sector, and many of those that choose to stay end up staying away from individual names and put their money in ETFs, such as the iShares Nasdaq Biotechnology ETF (NASDAQ:IBB). That may not be such a bad move given that investors in the IBB are actually up more than 1% since the start of the week, completely unharmed from the huge fall in Clovis' stock. 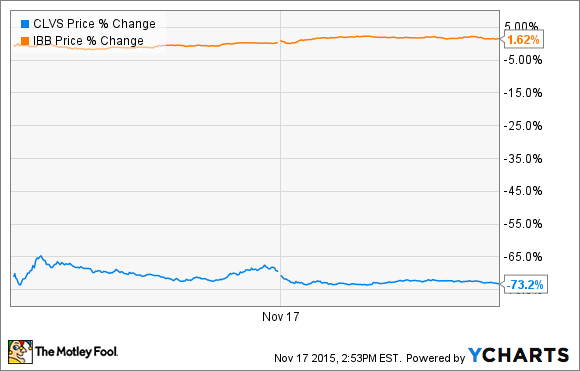 It's never fun to see a stock get decimated in such a short period of time, but investors who put money to work in the clinical-stage biotech space need to be mentally prepared for such violent movements. There even may still be reason to be bullish on Clovis, especially now that shares are so much cheaper. For those that are not that daring but still want to take part in the crazy world of biotech, I continue to think that the IBB is a solid choice.