Shares of department stores -- particularly those catering to the middle to upper-middle class -- have been having an awful month. For example, Macy's (NYSE:M) stock has lost more than a quarter of its value since the beginning of November, largely because of the company's unexpectedly large Q3 sales decline. 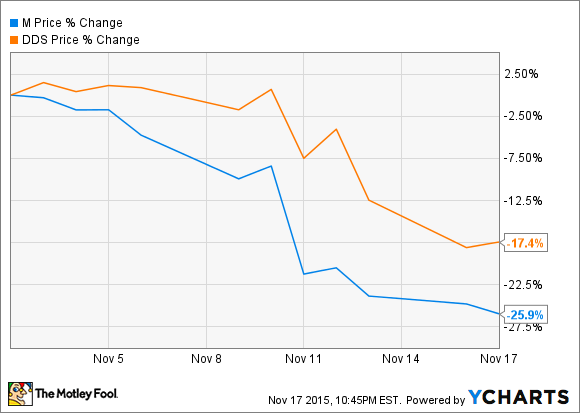 On Monday, Southern department store chain Dillard's (NYSE:DDS) announced weak results of its own. This may mean that Dillard's multi-year turnaround effort is running out of steam. And unlike Macy's, Dillard's doesn't have a multibillion-dollar real estate portfolio to fall back on.

Dillard's hits a snag
Last quarter, Dillard's reported EPS of $1.19. That was only $0.01 below the average analyst estimate, but analysts had significantly reduced their expectations in the month leading up to the earnings release.

In the year-earlier quarter, Dillard's had posted EPS of $1.30. The year-over-year earnings decline was driven by a 4% drop in comparable store sales. This led to higher selling, general, and administrative costs as a percentage of sales.

EPS would have declined even faster but for a 10% decrease in the share count attributable to Dillard's massive share buyback program. Year to date, Dillard's has spent $382.5 million on share buybacks. The company has $117.5 million remaining on its current share-repurchase authorization.

Rising inventory is a big concern
While Dillard's results last quarter were clearly subpar, an even bigger problem looms on the horizon: a glut of inventory. Dillard's ended Q3 with inventory up 6% year over year, which is too much, given that its sales have been declining.

The outlook for Dillard's is clouding over. Photo: Wikimedia Commons.

By contrast, Dillard's ended Q3 2014 with inventory roughly flat year over year, while sales had declined about 1% during that quarter. This better inventory position led to a 103-basis-point improvement in gross margin during Q4, driving 18% adjusted EPS growth.

Given that the mismatch between Dillard's inventory growth and its sales trend is even greater today than it was two years ago, the company could be in for a sharp drop in gross margin in Q4.

Dillard's isn't Macy's
Dillard's isn't the only retailer facing a glut of inventory this fall. Macy's ended last quarter with inventory up 4.6% year over year while its total sales declined 5.2% in Q3. And Macy's is just one of several other retailers facing a mismatch between inventory and sales trends.

However, Macy's has invested much more heavily than Dillard's in becoming a major player in e-commerce. Macy's also has a significant number of stores in high-profile locations that should continue to generate high sales volumes, even if U.S. mall traffic keeps declining. Both of these factors make a retail turnaround easier to pull off at Macy's than at Dillard's.

Additionally, Macy's owns lots of valuable real estate. Some investors think that Macy's real estate is worth significantly more than its $12 billion market cap. Macy's is already investigating ways to extract value from its real estate, either by redeveloping underutilized portions of stores or selling others off entirely.

By contrast, Dillard's doesn't have high-profile, high-traffic locations like this. (That's a big reason it lags Macy's by more than 30% in sales per square foot.) It can generate some cash here and there by selling off stores, but the value of its real estate couldn't possibly support its nearly $3 billion market cap if its retail operations go south.

Dillard's has been buying back its stock at a furious pace to prop up earnings per share. But because of the high fixed-cost nature of the department store business, even a moderate sales downturn could quickly undermine Dillard's profitability. If Dillard's sales continue to slide, no amount of share buybacks will get the stock back on track.