It's been nearly half a year since partners Regeneron (NASDAQ:REGN) and Sanofi (NASDAQ:SNY) gave us a preview of experimental drug sarilumab's ability to treat sufferers of rheumatoid arthritis that don't respond to drugs like Humira. Although the drug reached its goal of reducing signs and symptoms, there really wasn't enough info to gauge its potential in this increasingly crowded space. Luckily, a recent presentation at the American College of Rheumatology's annual meeting just gave us a few hints.

Worldwide sales of anti-rheumatics topped $48 billion last year. Success with sarilumab would be a huge boost Regeneron, which recorded $3.8 billion in revenue in the past 12 months. With U.S. sales of Sanofi's leading product Lantus in a freefall, it too could really use a win here.

There's a large group of rheumatoid arthritis patients underserved by existing therapies. Let's take a closer look at sarilumab's performance in this group to see just how much of an impact this antibody might have.

Room for improvement
Anti-TNF biologics dominate the anti-rheumatic market. Last year, Humira, Enbrel, Remicade, and Simponi chalked up a combined $32.5 billion in sales. Despite their monetary success, most rheumatoid arthritis patients aren't too thrilled with their current treatment. In a recent survey by Pfizer, just 30% of patients taking prescription medicines described their disease as under control.

You see, not all patients respond well to initial treatment with TNF inhibitors. Among those who do, many develop side effects. It's a bit dated, but a 2006 survey of rheumatologists revealed that more than 94% switched patients from one TNF inhibitor to another because of inadequate response or side effects.

Filling unmet need
Estimating the number of patients who would gladly switch over to a first-in-class treatment isn't easy. Given the level of dissatisfaction with existing therapies, it seems a viable alternative would do extremely well.

Results of the Saril-RA-Target study suggest sarilumab could be that alternative. The trial enrolled hundreds of rheumatoid arthritis patients who were inadequate responders or intolerant of TNF inhibitors. Initially, I didn't expect this difficult-to-treat patient pool would respond well to anything, and I was wrong.

Although the percentage of patients achieving a 70% improvement is nearly the same for both drugs, it's important to remember the Saril-RA-Target study only recruited patients for whom Humira isn't an option.

Looking ahead
Sanofi and Regeneron have already submitted an application for sarilumab to the FDA. Given the combination of safety and efficacy exhibited in the above study, I'll be very surprised if regulators don't give it a green light.

Drug launches are exceedingly unpredictable, but those that meet the needs of patients with limited options tend to succeed. If approved, I'd also be taken aback if sarilumab doesn't reach billion-dollar blockbuster status within several years after a possible approval.

Something I'm even more certain about is which of the two partners needs a win the most. 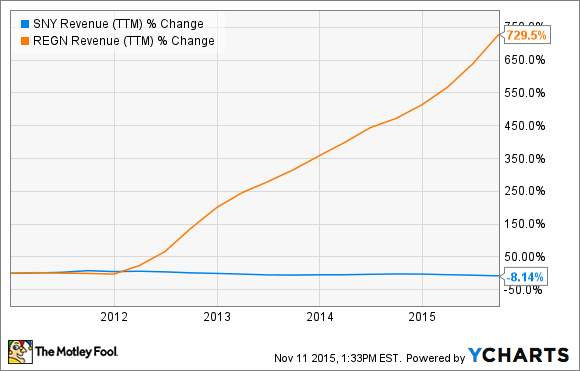 Regeneron's third-quarter revenue rose 57% this year compared to last, and the company is doing even better on the bottom line. Third-quarter net income more than doubled from $83 million in 2014 to $210 million this year. Next-generation cholesterol-lowering drug Praluent receives the lion's share of attention for Regeneron, but sales from this potential blockbuster have only just started rolling in. After winning FDA approval in late July, Sanofi (who partnered with Regeneron to develop the drug) recorded just $4.3 million in sales of Praluent during the third quarter.

With Praluent on the rise, and a possible winner in sarilumab, Regeneron's future could hardly look brighter. The mood at Sanofi HQ is far less jubilant. Sanofi's bottom line has been stagnating for years. Over the summer, the company's new CEO, Olivier Brandicourt, unveiled plans to reorganize business segments. That plan was largely ignored by Wall Street, but long-term guidance given during the November 6 investor day conference got a reaction. 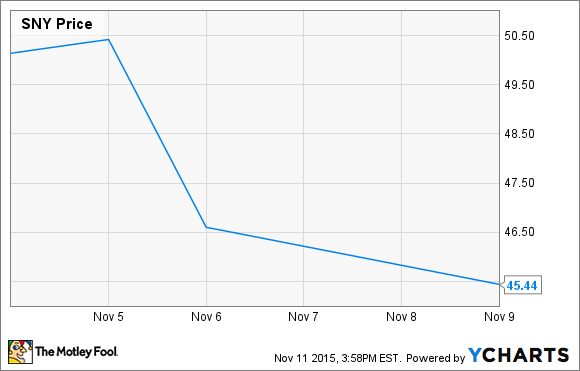 The stock is down about 10% after announcing expected top-line growth of between 3% and 4% until 2020. While most companies in this position would try to cut costs, that isn't a part of Sanofi's strategy. In fact, the company insists we'll need to wait until 2018 before margins improve.

It's a long way out, but with a bit of luck, sarilumab could go a long way toward helping Sanofi meet those lackluster goals.