It's now the time of the year when we turn our attention to Thanksgiving overindulgence and the December holidays. As if to help shareholders defray the added expenses of the season, several companies have increased their dividends.

As we get closer to the holidays, and further away from third quarter earnings season, the number and frequency of distribution raises has started to taper off. Nevertheless, last week saw quite a few hikes from notable companies, including:

1. McDonald's
It's usually a good move for a company to raise its dividend following an encouraging quarter with better-than-expected results. That's the situation with McDonald's (NYSE:MCD), which has boosted its quarterly distribution by 5% to $0.89 per share.

This move seals, for another year, the company's status as a dividend aristocrat -- one of the few stocks that has raised its payout at least once annually for a minimum of 25 years running.

It comes after a relatively sunny Q3, which to the market's surprise saw U.S. same-store sales notch a year-over-year increase for the first time in two years. In fact, that metric rose in all of the company's regions during the quarter, while overall net profit advanced a pleasing 23% to $1.3 billion. 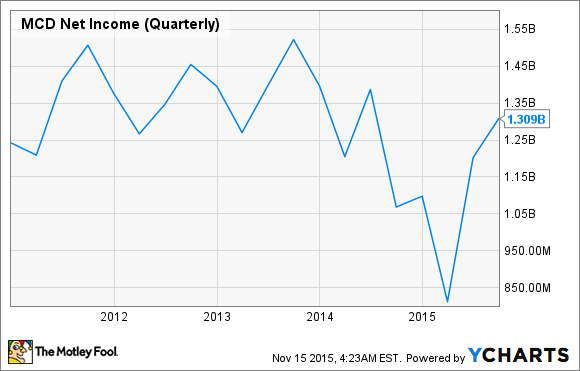 Revenue was down by 5% (to $6.6 billion), but much of the decline was attributable to the strong U.S. dollar. Factoring out foreign exchange headwinds, the top line would have risen 7%.

In the face of ever-intensifying competition from restaurant chains serving what's perceived to be healthier fare, McDonald's is starting to do better at staying relevant. It's currently in the middle of what it terms a "turnaround plan," with a higher dividend an important component of the scheme.

Time will tell, of course, whether the company will be able to improve its relevance in a casual dining space that has changed radically. I'd bet that it can, but success is by no means assured, and this market is tougher than it ever was. At the moment, it can afford that freshly raised dividend, but I wouldn't necessarily count on it lasting forever.

McDonald's will serve up its new payout on Dec. 15 to shareholders of record as of Dec. 1.

2. MDU Resources Group
Say hello to the newest dividend aristocrat. With the latest hike in its quarterly payout -- by 3% to almost $0.19 per share -- energy services provider and utility operator MDU Resources Group (NYSE:MDU) has now boosted its payout at least once annually over the past quarter-century. 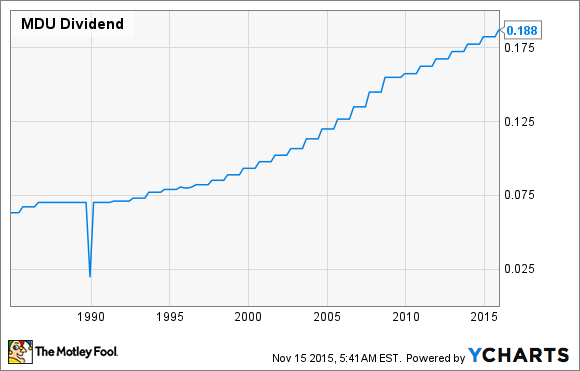 The company's business is a good mix of utilities operations (basically natural gas, but also electricity), pipelines, and construction materials. (Another business, energy exploration and production, is in the process of being hived off.) This combination mitigates against weakness in individual activities.

It also brings home the bacon. In MDU's Q3, top line grew by 6% year over year, to end up at nearly $1.3 billion. Adjusted net profit was nearly $75 million, or almost 10% higher than in the year-ago quarter.

The future looks rosy for the company. Its key construction materials and contracting division had a record quarter in Q3, posting a 25% year-over-year rise in adjusted earnings (to almost $69 million). A current backlog of over $500 million bodes well for 2016's results.

As for its exploration and production assets, five projects are being sold, and MDU is taking in a total of around $450 million from the divestment. So it'll become a leaner and meaner company, while reaping a nice payday to fatten the coffers.

In other words, MDU is in a fine place just now. I wouldn't worry about the sustainability of its dividend, nor about the company's ability to keep up those annual raises.

MDU's upcoming dividend will be paid next Jan.1 to stockholders of record as of Dec. 10.

3. Prudential Financial
This storied insurance and financial services company has been quite a reliable dividend payer over the years. It also likes to hike that payout once every year, and last week that habit reared its head -- Prudential Financial (NYSE:PRU) increased its dividend by a meaty 21%.

Habit aside, that might seem like a counter-intuitive move given the headwinds currently buffeting multinational insurers. There are two blustery ones at the moment -- the aforementioned strong dollar, and wafer-thin U.S. interest rates (which limit the returns on investments such companies make with the premiums they take in from clients).

But Prudential Financial isn't doing badly at all under the circumstances. In its most recently reported quarter, operating earnings (considered a fundamental benchmark in the insurance business) advanced a comfortable 7% on a year-over-year basis, to $1.1 billion. Revenue dipped 6%, negatively affected by those unfavorable currency developments. 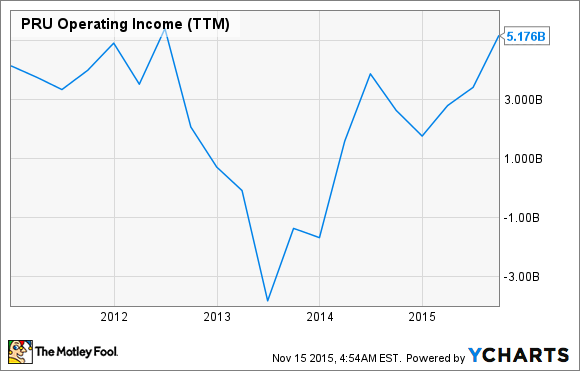 The strong dollar appears as if it might stay with us for a while. Domestic interest rates, on the other hand, look like they're on their way up soon, which should benefit insurers like Prudential Financial. Meanwhile, the company is usually cash flow positive, and typically has more than enough cash for outlays like its investments, and, of course, its dividend.

That payout is to be dispensed on Dec. 17 to shareholders of record as of Nov. 24.