Shares of action camera maker GoPro (NASDAQ:GPRO) have plunged 70% since the beginning of the year as investors have grown concerned about overheated valuations, competition and cannibalization, and the lackluster launch of the Hero 4 Session. As a result, formerly bullish analysts have scrambled to drastically reduce their price targets.

However, Piper Jaffray's Erinn Murphy recently set the bar the lowest, reducing her price target on the stock from $20 to $15. Murphy noted that GoPro's inventory rose 147% annually last quarter, and that it now expects fourth quarter sales to fall by 13% to 21%.

Murphy pointed out that prices for GoPro cameras were declining on Amazon (NASDAQ:AMZN) and that they were "popping up on several flash sales sites including Zulily, Groupon (NASDAQ:GRPN), and RueLaLa". Murphy believes GoPro is selling its gear at significant discounts specifically to reduce its inventory; the moves could cause its gross margin to slip below its prior guidance of 45.5% to 46.5%.

But before you panic...
Those bleak warnings immediately caused GoPro stock to slide below $20 per share, 17% below its IPO price of $24. But before investors panic and dump their shares, they should remember that Murphy told investors to accumulate the stock in the $50s and $60s all summer long. Murphy only reduced her price target on GoPro from $54 to $25 after the stock had fallen to the high $20s in October.

To be fair, GoPro has a lot to answer for. The company completely mispriced the Session at $400, the same price as the popular Hero 4 Silver. Slashing its price by $100 caused GoPro to take a $19 million writedown last quarter, which contributed heavily to the company's sales missing the low end of its own forecast by $30 million. Without new flagship  cameras for the holiday season, GoPro now expects a double-digit sales decline for the current quarter.

Looking ahead, its plans for drones, VR, and media expansion all remain hard to quantify. Lastly, GoPro committed $300 million to a buyback, which would have been better spent on R&D, marketing, or small acquisitions.

How steep are the discounts?
Murphy's thesis is that discounted GoPro cameras will impact its gross margins. During a recent price check on The Tracktor, which tracks Amazon prices over time, I noticed that the lowest prices of a new Silver and Session had been respectively reduced by 18% and 20%. The price of a new Black remained relatively unchanged.

The GoPro brand has appeared on Zulily, but no cameras have been offered yet. On Groupon, however, I found a few more troubling discounts -- the Hero 4 Black, Silver, and Session had all been marked down 16% to 25%. Those discounts, while time-limited, support Murphy's thesis. Moreover, these discounts will likely reappear throughout the holiday season. 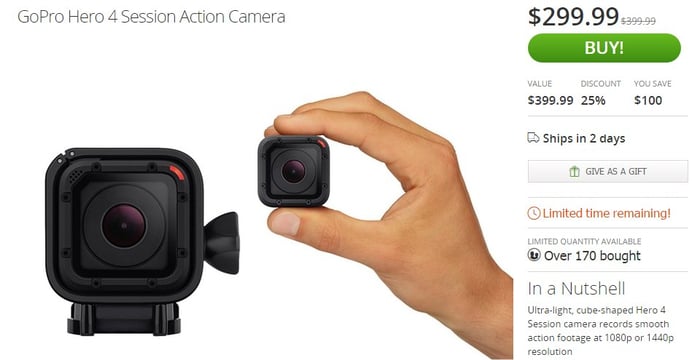 Murphy estimates that every 50 basis point in gross margins will equal a cent in earnings per share in the fourth quarter. Based on that, Murphy maintains that GoPro will earn just $0.34 per share during the fourth quarter, which is well below the consensus estimate of $0.41.

I'm not sure that GoPro's earnings will decline as much as she claims, but the company could face substantial margin pressures if it offloads its inventory at steep discounts. While this could boost sales growth during the quarter and clear the way for drones and new cameras in 2016, it could also cheapen GoPro's reputation as a premium brand.

Get ready for a choppy December
Looking ahead, GoPro investors should brace themselves for GoPro supplier Ambarella's (NASDAQ:AMBA) third quarter earnings on Dec. 3.

Last quarter, Ambarella's muted guidance for the rest of the year spooked GoPro investors, and caused both stocks to tumble. Both stocks will also likely be affected by four conferences next month, and any news regarding FAA drone regulations. If discounted GoPros pop up a lot more between Black Friday and Christmas, we could see more analysts slash their price targets.

So what now?
In a previous article, I advised investors to hold onto GoPro stock but to refrain from buying any more shares. The stock is trading at 15 times forward earnings, but that ratio is based on analyst estimates that have mostly missed the mark. I'll personally be watching to see how December goes, and waiting for GoPro to offer investors a clearer vision of its 2016 pipeline before averaging down from my current purchase price of $29.