Image by PublicDomainPictures via Pixabay

It was a good week to be an investor in the healthcare space, as several exchange-traded funds that focus on the sector ended the week much higher than they started. While the outperformance appears to be generally broad based one fund in particular -- the PowerShares Dynamic Pharmaceuticals Portfolio (NYSEMKT:PJP) -- had an especially outstanding week. Shares of this ETF ended the week more than 4.2% higher than it started, which was well ahead of the returns of the S&P 500. 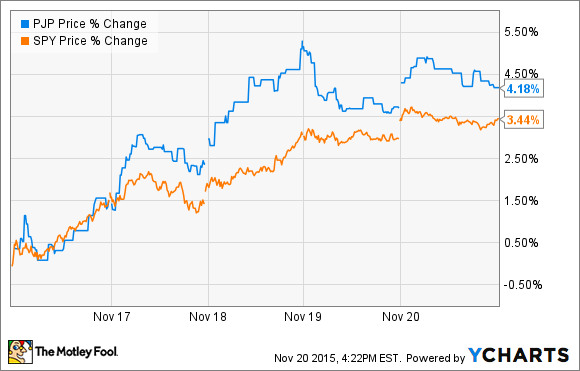 So what is inside this fund that help explain the out-performance?

Cracking it open
While healthcare ETF's all tend to all hold a basket of similiar stocks from the healthcare sector, they each do so in a slightly different way that helps them to stand apart from the crowd. In the case of the PowerShares Dynamic Pharmaceuticals Portfolio, its secret sauce is that it invests at least 90% of its assets in common stocks of 30 different US pharmaceuticals companies that it picks based on its own criteria and it rebalances its holdings every three months.

Having only 30 companies in its portfolio tends to give a hefty weighting to each one of its holdings. Take a look at a snapshot of its current top 10 holdings to see what I mean:

As you can see from the table above this ETF holds a fairly large percentage of its assets in its top 10 names, so if a handful of these companies have a good or bad week then the entire ETF is likely to also have a big move.

What went right this week
While many of this ETF top holdings put up solid performances for the week, the funds appears to have enjoyed big moves from two companies in particular, Amgen (NASDAQ:AMGN) and Bristol-Myers Squibb (NYSE:BMY), as both of these companies posted gains of more than 5% during the past week. 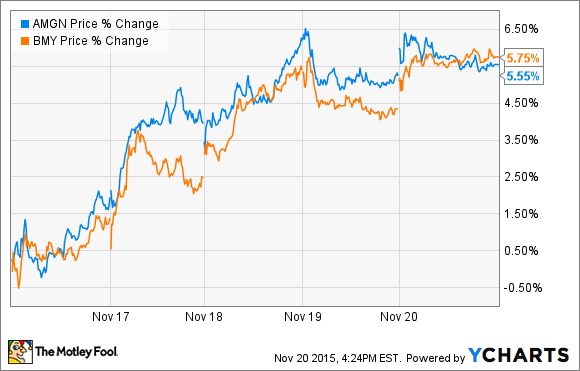 So what happened at these companies to push their shares higher?

Amgen grabs an approval
Amgen managed to grab a nice regulator green light during the week. Its cancer drug Kyprolis received approval by the European Commission for use in combination treatment for patients with relapsed multiple myeloma. That makes Kyprolis the first irreversible proteasome inhibitor to be approved to treat relapsed multiple myeloma in the region, and certainly bodes well for its near term future.

Kyprolis has been quite the winner for Amgen already, as the drugs sales grew more than 46% in the most recent quarter to $124 million. Grabbing an additional approval should certainly help it continue to grow nicely, so I certainly understand why investors bid up shares this week.

A breakthrough therapy?
Not to be outdone, Bristol-Myers Squibb also has some good news to share as it announced that the FDA has accepted a supplemental biologics license applicant for Opdivo, its lung cancer treatment. Bristol-Myers is looking to expand Opdivo's labelling to include advanced renal cell carcinoma and the agency has already bestowed it with the coveted 'breakthrough therapy' designation for this indication, which certainly bodes well for an approval.

Opdivo has also been a terrific winner for Bristol-Myers Squibb as it generated more than $305  million in worldwide sales in the last quarter alone, so grabbing an additional regulatory clearance would certainly help its future growth prospects. The company needs all the help it can get as it has seen a big reduction in sales of a handful of its best selling drugs like Ability, which has stunted the company's growth. Given the news this week its no wonder that investors bid up shares.

A run thats far from done
The PowerShares Dynamic Pharmaceuticals Portfolio ETF has most certainly been a terrific investment for quite some time, as it has been handily outperforming the S&P 500 over the last 5 years. This ETF also currently offers investors a juicy 2.82% dividend yield and has a relatively modest expense ratio of 0.56%. Although its lofty price to prospective earnings ratio of 25 makes it a bit of an expensive ETF at the moment, this fund clearly has a strategy that works, so it may be a good choice for investors who are looking to add some additional healthcare exposure to their portfolio.