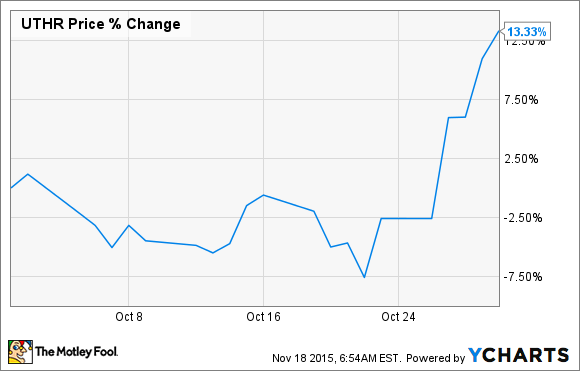 What: Shares of the mid-cap biotech company United Therapeutics (NASDAQ:UTHR) rose by over 13% last month, according to data provided by S&P Capital IQ. United's stock was powered higher by a strong third-quarter earnings release, where the company reported that its total revenues climbed by 17% during the three-month period compared to a year ago.

So what: United's stock has waxed and waned along with the iShares Nasdaq Biotech ETF (NASDAQ:IBB) throughout the entire year, reflecting the market's fickle attitude toward biotech stocks in general: 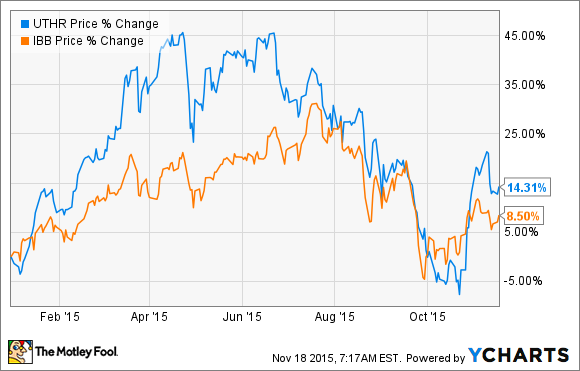 The core issue is that market doesn't seem to know what to make of the ongoing debate over drug prices. In short, biotech stocks have tumbled at times this year when the debate has peaked, only to rebound once companies like United post stronger-than-expected earnings. Fortunately, the overall trend for United, as well as the iShares Biotech ETF, has been up in 2015, showing that the market hasn't totally given into fear.

Now what: The Street thinks United can grow its top line by another 15% next year fueled by increasing sales of its pulmonary arterial hypertension franchise, making it one of the fastest-growing mid-cap biotech stocks. The company also recently announced a $500 million share repurchase program, which should help to pick up its bottom line as well. It should therefore have a decent shot at outperforming broader industry-based funds like the iShares Biotech ETF over the next 12 months, making it a good stock to consider adding to your portfolio.