The S&P 500 Index (SNPINDEX:^GSPC), created by Standard & Poor's in 1957, is one of the most widely followed stock indexes in the world, consisting of 500 of the largest companies listed on either the New York Stock Exchange or the Nasdaq. Generally, when people talk about the performance of the stock market, they're actually talking about the S&P 500 index, or one of the index funds that track it, such as the SPDR S&P 500 ETF (NYSEMKT:SPY).

Despite how popular the S&P 500 index is among investors, there are still a few things about the venerable index that may surprise you. Three of our Foolish contributors are ready to fill you in.

For example, it needs to maintain a market capitalization of at least $5.3 billion, have at least 50% of its stock publicly available, and show four consecutive quarters of GAAP net income. Further, the annual dollar value at which it trades should be higher than its adjusted market capitalization, and it must have been listed on the public markets for at least six months.

Sometimes these criteria can keep even huge companies out of the index for years on end. Berkshire Hathaway, for example, only joined the index in 2010, even though it was valued at about $158 billion at the time, making it largest public company in America excluded from the index. The company's class B shares had previously been priced at almost $3,500 apiece, and as a result they didn't trade enough to meet the S&P 500's volume standards. When shares were split 50-to-1, however, their price dropped to the double digits, and the S&P 500 welcomed Berkshire to the fold.

I'm sure Warren Buffett smiled when the news broke that his company would finally be included in one of the world's most important indexes.

Tim Green: Dividends have turbocharged returns
The S&P 500 index offers a vivid illustration of the benefits of long-term investing. According to S&P Dow Jones Indices, $1 invested in the index (or rather the precursor to the index) in 1930 would have grown to $66.48 by the end of 2012 -- that's a 5.2% annualized return. That may not seem like much, but remember that this time period includes the Great Depression, the Great Recession, and all financial panics in between.

Furthermore, those returns exclude dividends, and it turns out that dividend income has a profound effect on long-term returns. From 1925 to 2012, about one-third of the average monthly total return of the S&P 500 index was due to dividend income. What does this mean in the long run? Well, $1 invested in the index in 1930, with dividends being reinvested along the way, would have grown to $1,832 by the end of 2012. That's a 9.6% annualized return -- a far more impressive result. 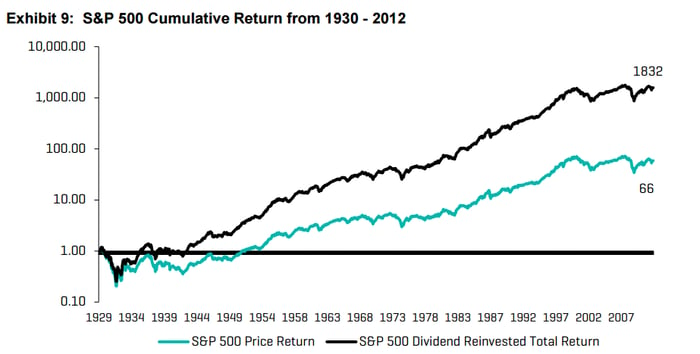 Dividends are a long-term investor's best friend, and over a period measured in decades, reinvesting those dividends greatly enhances returns. Simply looking at how the value of the S&P 500 index has changed over time doesn't convey the real potential of a simple strategy of buying, holding, and reinvesting dividends.

Steve Symington: Turnover is high
The S&P 500 is the most widely accepted proxy for large-cap U.S. stocks, so you might assume that turnover in the index's constituent stocks is relatively low. But you'd be wrong.

Just before the S&P 500's 50th anniversary in early 2007, Standard & Poor's revealed that only 86 original constituents of the 500-member index had stood the test of time. Between the mergers, acquisitions, bankruptcies, and economic gyrations that have occurred since then, another 21 of those original constituents have been removed and replaced in the index -- and that doesn't include General Motors, which was dropped following its bankruptcy in 2009 and then reinstated four years later.

Foster noted that this acceleration is largely due to a combination of stronger growth and the increasing rate of disruptive technological innovation in recent years. In the end, while that arguably makes it harder than ever for investors to identify stocks of enduring businesses to buy and hold for the long term, it certainly won't stop us from trying.