You may not know the name Opower (NYSE: OPWR), but it might just know you. Knowing you, in fact, is the key to the company's recent successes in helping its utility customers reduce the power electric users like you use during brief, but important, grid straining periods. That's just one more reason for Opower's customers to love it..

Opower who?
Opower is something of a middleman, providing cloud-based services to nearly 100 utilities around the world. The basics are pretty simple, Opower takes utility usage data and spits it back out to customers in print, on the Web, and on mobile devices. Essentially, it lets around 50 million customers see how they're using power and saves utilities the cost and effort of doing this work themselves. 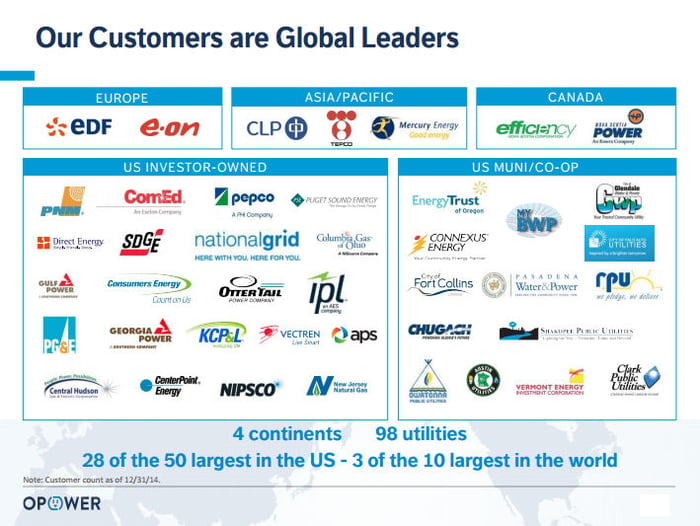 But step back one moment and think about this. Opower has access to the energy use data of 50 million customers. In today's "big data" world and the "Internet of things" connectivity (i.e., utility meters), this data is highly valuable. But what do you do with it?

Opower has been trying to prove that it can reduce customer demand in a pinch. And the numbers are big, as much as a 5% demand reduction. That doesn't sound like much, but for a utility facing peak demand, trimming a few percentage points off demand could be the difference between smooth sailing and power outages. The impressive thing is that Opower has proved it can achieve this level of use reduction not once, but twice..

Don't underestimate the impact of this. There are two types of power plants, base load and peaking. Base load plants run just about all the time and peaking only get turned on when demand spikes. For example, so-called combined cycle gas powered plants run constantly at around 50% to 60% of their full capacity. But steam turbine gas plants usually run in the high single digits until the summer, when they can run at twice that rate. In other words, these plants pretty much just sit around waiting to be used and then only for brief periods of time. That makes them very expensive to keep around for the relatively infrequent "peak" periods when they are desperately needed to ensure grid reliability. Opower has proven it can help reduce the need for peaking plants.

Not the only one
If you've been around the utility space for a while, you know about demand response. Essentially, this means getting customers to temporarily cut back on their energy use during peak periods. It isn't new. Demand response has been one piece of EnerNoc's (NASDAQ: ENOC) broader business for years, only it's focused on business users, offering financial incentives to get utility customers to cut back on demand during peak periods.

The industrial space is an easier market to reach than consumers, because a small number of large customers are being targeted. Often these utility customers are happy to have some help in cutting their utility costs, too. So getting paid to use less power is a win/win, and EnerNoc helps make it happen. EnerNoc, for reference, works both with utilities and corporations with the broader goal of managing power use; demand response is only one part of the company's larger business. That said, EnerNoc's demand response efforts are a net positive because it helps utilities avoid the need and cost of running peaking plants even though the utilities have to pay the industrial customers to cut back their power use.

Opower's demand response efforts are different because the company has targeted retail customers and there's no money involved, which is why this is such an important success. Basically, Opower has proved that utilities can reduce peak demand just by asking.

We've all heard or seen the broad-based calls for people to cut power use. Those don't work, and in some cases they actually increase demand. The reason Opower has been able to achieve up to a 5% power reduction is that it personalizes the communication. Opower, which knows how you use power, can speak directly to your usage and provide you with feedback about how well or poorly you've done compared with your own use and to the power use of your neighbors. (Do you see how personalized Opower's message is?)

So what?
Now this is honestly exciting, but more so for utilities than you. What your takeaway should be is that Opower is using big data to effect big changes that make its customers -- utilities -- happy. That helps explain why revenues have been heading steadily higher since the company went public a few years ago.

But Opower is losing money today, so it's probably not a good choice for risk-averse investors. However, for more aggressive types, it's worth a deep dive. Once Opower gets a utility to sign on, it has an annuity-like contract in place because it's not easy to switch providers. Putting a number on that, around 90% of Opower's revenues are recurring in nature. The more customers it gets, the more recurring revenue it generates. 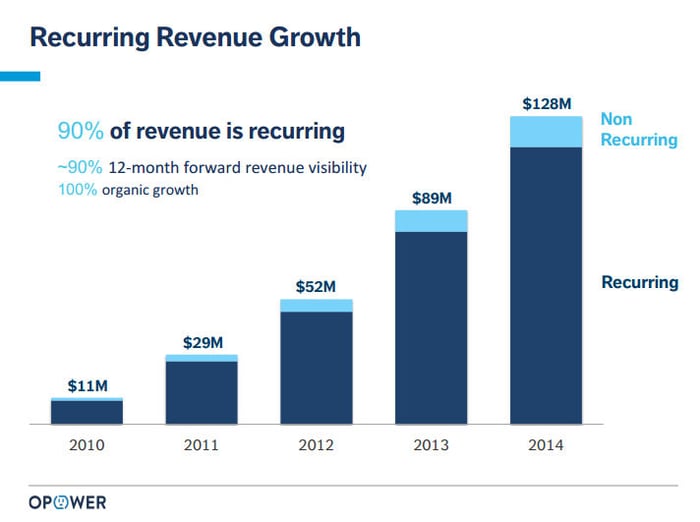 The losses are more about building out its systems and winning new customers, which only adds more value to the over 500 billion meter read database this utility industry focused company uses to differentiate its service. For example, in 2014 it had $84 million in revenues and spent $61 million on sales and marketing and $46 million on research and development. The trends so far this year are roughly similar on the sales front, with a slight reduction on the R&D side. But once Opower reaches critical mass, its annuity-like revenues should start to fall to the bottom line as profits.

And successfully proving that it can cut electricity demand is a huge selling point. Why? Because the other option for a utility is to build more power plants -- that's far more expensive than having Opower just ask customers (like you) to curtail their use. Opower is a small company with big ambitions. So far, though, it's proved its worth to its customers. If you're looking at big data and the Internet of things, Opower should be on your watch list.