Quality stocks rarely come cheap, and 3M Company (NYSE:MMM) is a prime example. The company trades with a P/E in excess of 20 times and has recently cut its full-year 2015 guidance in the face of a weakening industrial economy. However, its underlying performance remains excellent, and management recently announced restructuring and productivity improvement programs designed to increase profitability in the next few years. Let's take a look at the pros and cons of buying 3M stock.

To put the savings figure into context, 3M is expected to generate $30.4 billion in sales in 2015.

And now, the bear case:

Weakening industrial economy
As you can see in the following chart, 3M's pricing growth has remained solid even as the industrial slowdown has caused organic volume growth to stutter to just 0.1% in the third quarter. 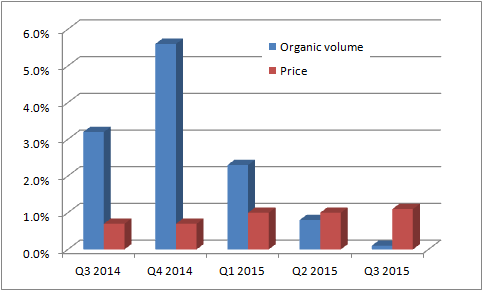 Moreover, 3M recently cut its full-year EPS expectations (excluding restructuring charge) to a range of $7.73 to $7.78 from a previous range of $7.73 to $7.93. Of course, it's not alone in seeing slowing conditions, as industrial peers like Illinois Tool Works (NYSE:ITW) and Dover Corp (NYSE:DOV) have both been forced to cut guidance recently.

However, not all industrial companies were made equal, and Dover Corp's heavy exposure to energy and fluid technologies has led to a marked deterioration in bookings. Meanwhile, Illinois Tool Works is seeing underperformance in its most cyclical industrial areas like welding, polymers, and electronics, but its food equipment, construction, and automotive segments are performing well.

The lesson from Dover Corp's and Illinois Tool Works' earnings is that energy, emerging markets, and industrial-facing businesses are weaker, but developed markets and consumer-facing segments (such as automotive and aerospace) are OK.

3M Company's segments
Indeed, these themes are nicely expressed when looking at segmental performance throughout the year. Organic revenue growth has remained solid in its consumer (14% of year-to-date segmental income), healthcare (22%), and safety & graphics (18%) segments, but its electronics & energy (16%) and industrial (31%) segments have deteriorated. 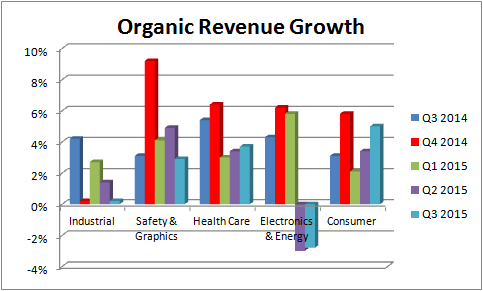 However, as you can see below, 3M's operating margin expansion has been impressive in the last couple of quarters, and it speaks to the ability of management to generate productivity improvements. 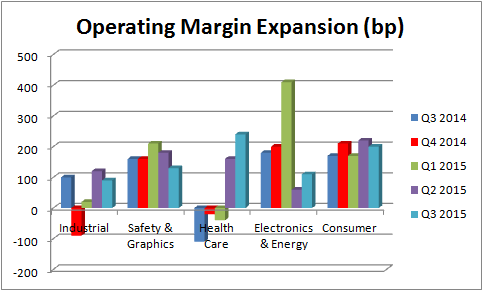 The takeaway
Underlying margin expansion has been impressive in 2015, and 3 out of 5 segments (consumer, healthcare, and safety and graphics) continue to generate good underlying sales growth. Moreover, the ERP rollout and cost savings from restructuring offer some self-help upside to the stock in future years.

However, a look at valuation suggests the stock isn't cheap on a historical basis -- or against its peers. Incidentally, I'm using the enterprise value metric, which is market cap plus net debt to earnings before interest, taxes, and depreciation, or EBITDA, as it's a good way to compare companies with different debt levels and tax rates. 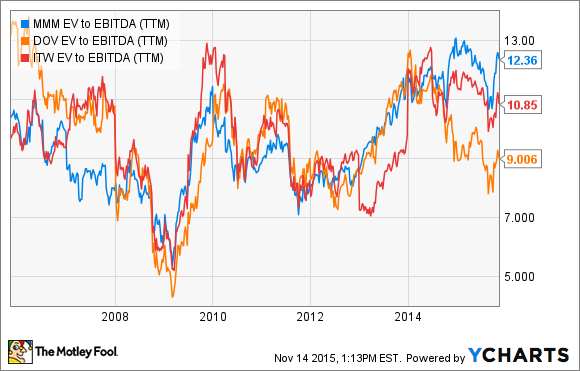 Throw in the weakening industrial economy, the risk inherent in the ERP rollout, and constrained emerging market growth, and it's hard to make a strong case for buying the stock. It looks slightly overvalued to me.