A few years ago, many investors had left Best Buy (NYSE:BBY) for dead. New CEO Hubert Joly had laid out a turnaround plan for the consumer electronics giant, but many observers saw Amazon.com (NASDAQ:AMZN) as a threat that couldn't be stopped.

During the course of 2013, those fears quickly dissipated as Joly began to implement his plan. As a result, while Best Buy stock lost roughly three-quarters of its value between late 2010 and late 2012, it had recouped almost all of those losses by late 2013. 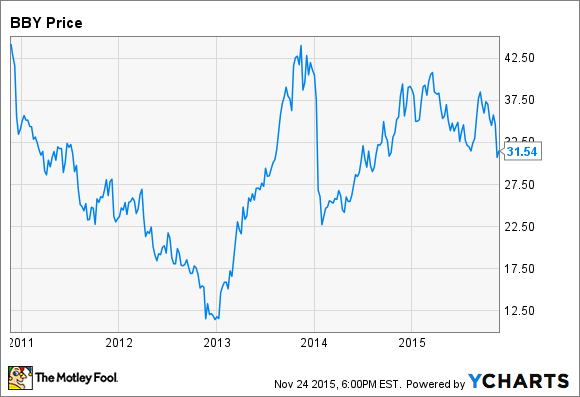 The reality has been somewhere in between. Joly's intervention ensured that Best Buy has not been decimated by Amazon's rise. But meaningful, sustainable profit growth remains an elusive target.

Domestic sales stagnate again
Just a few months ago, Best Buy finally seemed to be back on a growth trajectory. It posted flattish comparable store sales growth during Q1, but in Q2, domestic comps rose 3.8% year over year. This drove a big revenue and earnings beat, sending Best Buy stock up 15%.

However, the improvement in Best Buy's sales trend was a short-lived phenomenon. Domestic comparable store sales growth slowed to just 0.8% in Q3, with total revenue down 2.4% due to steep declines outside the U.S.

This revenue performance was slightly worse than analysts' expectations. Moreover, the sales trend worsened over the course of the third quarter. As a result, Best Buy expects roughly flat domestic revenue in Q4 and a low-single-digit decline in total revenue. Analysts now expect Best Buy's Q4 adjusted EPS to decline to $1.36 from $1.48 a year earlier.

Best Buy's earnings actually came in well ahead of analysts' estimates last quarter due to an unexpected level of margin expansion. But investors sent the stock down, caring a lot more about the sluggish Q3 sales results and weak guidance.

This wasn't the first setback
Unfortunately, setbacks have been all too frequent at Best Buy in recent years. For example, the company entered the 2013 holiday season expecting to face a number of profitability headwinds, but believing that it could offset most of these through cost reductions.

Best Buy has suffered several setbacks in the past few years. Photo: The Motley Fool.

Instead, a highly promotional holiday retail environment -- along with the decision to match prices from Amazon.com and other retailers -- undermined Best Buy's profit margin. Revenue declined 3% year over year in that quarter, while adjusted EPS dropped to $1.24 from $1.47 a year earlier.

There have also been smaller disappointments along the way, such as a revenue slowdown in the middle of last year that was caused in part by a smartphone sales slump prior to the iPhone 6 launch.

Competition takes a toll
These setbacks by themselves don't necessarily make Best Buy a bad investment. Any big turnaround project is likely to have its ups and downs.

The bigger problem is that over the three-plus years that Joly has been at the helm, Best Buy hasn't made much progress. It has slashed annual costs by more than a billion dollars and exited some underperforming businesses, but the company has needed all of these savings and more to invest in lower prices to fend off the threat from Amazon.

Year to date, Best Buy's profit margin has recovered somewhat, but this gain will be reduced by an expected 25-45 basis point Q4 operating margin decline.

Furthermore, some of Best Buy's year-to-date profitability improvement may have come from unsustainable factors. For example, management thinks it's unlikely that Best Buy will continue to get the same level of profit-sharing payouts from its extended service plan portfolio that it has received this year.

Additionally, Best Buy's appliance sales have surged this year as part of a broader rise in home improvement purchases that will eventually cool down. Or worse yet, Amazon could decide to invest in the appliance market, where it doesn't have a meaningful presence today.

When all is said and done, analysts expect Best Buy's EPS to rise by a meager 1% this year to $2.62. They hope for a return to high-single-digit EPS growth next year, but even that would leave Best Buy well short of its profitability level of five years ago.

Hubert Joly has done an admirable job after having been dealt a bad hand at Best Buy. However, an earnings recovery is nowhere in sight, and Best Buy stock isn't cheap enough to justify waiting around.