Last week at the Morgan Stanley Global Consumer & Retail Conference, Sandy Douglas, president of Coca-Cola North America, took a stab at addressing one of the foremost concerns of The Coca-Cola Co. (NYSE:KO) shareholders:

People ask me, when do you think the carbonated soft drink categories [are] going to stop declining, and it's an important question. ... That answer -- that question, is born of measuring volume, a gallonage, not packages. Gallonage is declining in carbonated soft drinks. Packages by the end of the '90s were all huge, and they were boring, and the consumer rejected them.

If you're not associated with the beverage industry, you may be unfamiliar with the term "gallonage," which is what it sounds like: a measure of volume in gallons. Douglas traces part of soda's decline to the way Coca-Cola and competitor PepsiCo, (NASDAQ:PEP) used to present their carbonated beverages on store shelves: in pure bulk and as a commodity to be thought of as a primary liquid, replacing water at many points in the consumer's day.

Our thirst for soft drinks from just two decades ago seems overdone in retrospect, and the days of indiscriminate buying of 2-liter Coke products is but a memory for many a household. Still, to hear a Coke executive say that measuring volume isn't necessarily the best metric to understand and increase sales is slightly heretical.

After all, the Coca-Cola Company measures its quarterly progress by its volume of bottles and concentrates sold. Yet future revenue expansion will be found, management believes, in paying attention to packaging and marketing. In the same session, Douglas pointed out that the drive to the smaller, higher-margin packaging, such as the 8.5-oz. aluminum contour bottle and the 7.5-oz. "mini" can, has partially offset the decline of the company's core 12-oz. cans and 2-liter plastic bottles.

These innovations in how Coke presents its beverages are apparently demand-driven, as Douglas used the example of how smaller packages "recruit" customers -- in particular, moms -- who "want to treat their kids, but they don't want them to have too much, they want them to be in control."

The slimming formula: asset light
Thus, volume doesn't necessarily have to climb if revenue can still increase, propelled by tinier packages with higher price points. The shrinking can of a Coke is a neat metaphor for a more global shift in Coca-Cola's strategy.

That is, the company increasingly sees itself as more of a marketing organization than a manufacturer. In the company's second quarter 2015 earnings conference call this summer, CEO Muhtar Kent declared the following: "We've found that disciplined quality marketing investments drive growth better than any other strategy or action."

Indeed, if you look at Coca-Cola's recent actions -- from accelerating its handover of bottling operations to its bottling partners, to trimming headcount, to investments in alternate beverage brands such as organic juice maker Suja Life -- it's clear the company wants to be a leaner organization, which unlocks the value in brands versus simply moving product.

Put another way, Coca-Cola foresees a higher return on capital by investing in greater marketing spends, packaging innovation, and emerging brands than it does in brute force volume growth through its own manufacturing capabilities.

Coca-Cola executives are quick to highlight that scaling up marketing, alongside Coke's $4 billion productivity program, is already resulting in a higher level of fiscal performance. CFO Kathy Waller, who also attended the Morgan Stanley conference, illustrated this phenomenon in the following slide: 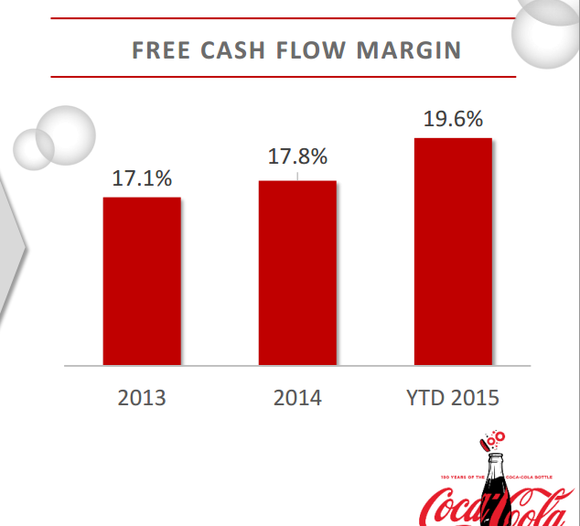 Some of this cash flow efficiency arises from the company's recent focus on optimizing working capital. But it's also the result of Coke's changing economic approach. The message that Coke wants to underline is that its slimming formula is delivering tangible progress -- you just can't see it clearly since foreign currency translation keeps taking significant chunks out of revenue and earnings each quarter.

Indeed, in the very same session, Waller gave an update on foreign currency impacts for the fourth quarter of 2015. Coke's chief financial officer now projects a 7% headwind on net revenue and an 11% drag on income before taxes -- a percentage point worse on each count than guidance issued on the company's third-quarter call last month. At the moment, currency effects are drowning out a potentially persuasive argument about Coke's evolving business model.