Crude oil production in the U.S. peaked earlier this year and has begun a slow descent. 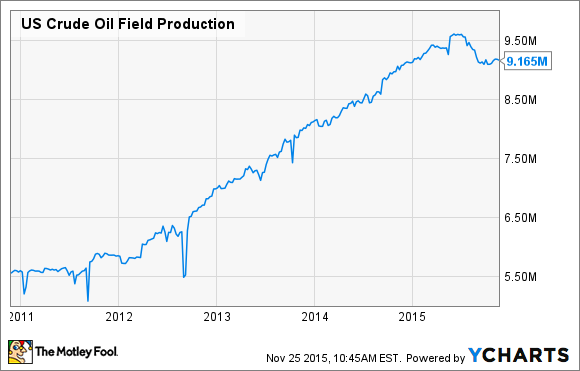 Prognosticators who once expected a half-million-barrel decline off that peak by the end of the year are now estimating that production could fall by 700,000 barrels from the peak before the year is out. Given current industry activity levels, another 900,000 barrels per day of production could be lost in 2015. That number might even prove to be conservative, given some of the preliminary capex budgets producers are putting out, suggesting that activity levels could be heading meaningfully lower in 2016.

Big oil backs off on shale

One company that's clearly tapped the brakes on shale-fueled growth is ConocoPhillips (NYSE:COP). Before the downturn, the company had been enjoying strong double-digit year-over-year production growth from its Bakken and Eagle Ford shale assets. However, it now anticipates that its fourth-quarter production will be modestly lower. That's not because it's run out of opportunities, but simply because the company isn't running enough rigs to even maintain its production, let alone grow it. That's something that Matt Fox, ConocoPhillips' EVP of E&P, detailed on its third-quarter conference call:

So to keep Eagle Ford production flat probably requires between seven and eight rigs. Currently we're running six. The Bakken requires about closer to five rigs. We're currently running four. So you'd be looking at maybe three additional rigs to maintain production flat. And if you look at all-in cost, drill, complete, hookup and so on you can use an order of magnitude of $150 million, per rig line per year. So maybe $400 million.

In other words, just to keep its production flat in those two shale plays, the company would need to add three more rigs at a cost of upwards of $400 million for the full year. However, given where commodity prices are right now, the company doesn't see a need to keep its production flat in these two plays. That's partially a function of ConocoPhillips' global business model, where it has about a half dozen major projects that are just beginning to ramp up. So, with production growth coming elsewhere, it could cut back on shale for now.

Aiming for even, roughly speaking
Smaller producers, however, don't have that luxury, with most just trying to keep production flat next year. That said, flat is a bit of a relative number. Take Continental Resources (NYSE:CLR), which produced 228,000 barrels of oil equivalent per day, or BOE/d, during the third quarter and expects to exit the year producing 210,000 BOE/d. Looking ahead to 2016, Continental Resources is currently planning to drill just enough wells to hold its production roughly flat, but the number it's looking to hold flat is its average daily production over the course of the year, which is around 200,000 BOE/d. What this suggests is that even though producers are aiming for flat production in 2016, this isn't off the peak or even the exit rate, but off the much lower average rate for the year.

Investor takeaway
Production in the U.S. is clearly heading lower because drillers both large and small aren't drilling enough wells to even maintain production. That suggests that the currently oversaturated oil market could quickly drain, especially with producers such as Continental expecting a 12% decline in production from its third-quarter peak. This could be the key to rebalancing the oil market in 2016, potentially leading to better oil prices and improved profitability for drillers, which of course would do wonders for oil company stock prices.