Brian Feroldi, Sean Williams, and Cheryl Swanson
(TMFTypeoh)
Author Bio
Brian Feroldi has been covering the healthcare and technology industries for The Motley Fool since 2015. Brian's investing strategy is to buy high-quality companies and then let compounding work its magic. See all of his articles here. Follow @brianferoldi
Follow @brianferoldi

If you were smart enough to add a few shares of Gilead Sciences (NASDAQ:GILD) to your portfolio 10 years ago, you'd be sitting quite pretty today. Gilead Sciences has been a monster winner over that time period, providing its investors with returns that have smashed a comparable investment in the S&P 500. 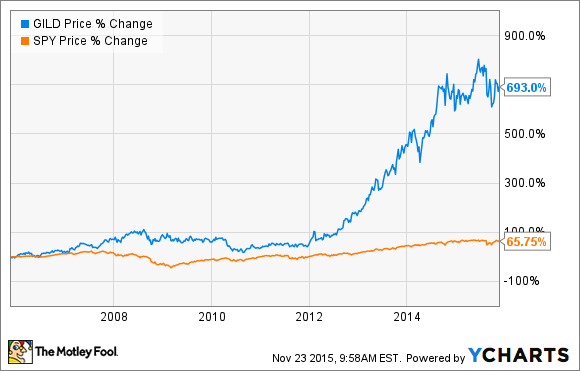 Of course, investors who are interested in Gilead's stock today cannot simply rewind the clock to take advantage of its past success, so the only question that matters to them now is where this company's stock will be heading over the next 10 years. With that question in mind, we asked our team of Motley Fool contributors to share what they think Gilead Sciences' business will look like 10 years from now. Read below to see what they had to say.

Sean Williams: Where will Gilead Sciences be 10 years from now? Likely higher in terms of stock price, but the look of the company will more than likely be far different than what we see today.

At the moment, Gilead is highly reliant on its antiviral products, such as Harvoni and Sovaldi for hepatitis C, and Stribild as a treatment for patients with HIV. In the third quarter, global antiviral products accounted for $7.7 billion of Gilead's $8.21 billion in total revenue. For the time being this reliance fits Gilead's strategy just fine. There are an estimated 180 million people globally with HCV, per the World Health Organization, making it a disease with an abundant patient pool. It also doesn't hurt that no other HCV therapy on the market has matched Gilead in convenience and efficacy.

But the Gilead of 2025 is probably going to look a lot different. The Gilead is 2025 will likely still be a major player in treating hepatitis C, but there are probably going to be around a half-dozen additional entrants into the field. By 2025, Gilead may have garnered drug approvals for other common liver diseases, such as nonalcoholic steatohepatitis and hepatitis B. The increased competition in hepatitis C could wind up weighing on Gilead's luscious margins, but I highly doubt it'll make much of a dent in Gilead's overall profitability.

The biggest change I foresee is an expansion of Gilead's product portfolio into oncology and inflammation/respiratory. Zydelig (known scientifically as idelalisib) has demonstrated promise in certain types of leukemia, and JAK inhibitor momelotinib could prove successful in pancreatic cancer and myelofibrosis, a rare type of bone marrow cancer. Within its anti-inflammatory/respiratory pipeline you'll want to monitor GS-5745, which could have wide-ranging implications from rheumatoid arthritis to COPD.

I do believe Gilead's growth rate will slow over the next 10 years, but even with modest margin pressures would still expect its top- and bottom-line results to improve by 2025.

Brian Feroldi: Ten years is a long enough time period for Gilead to navigate even its phase 1 clinical stage compounds through the regulatory approval process, so it makes sense to look there for clues about where this company is heading over the coming decade.

While Gilead has a number of drugs in early clinical trials that are designed to expand its leadership position in its core markets (HIV/AIDS and hepatitis C), Gilead has also been experimenting with drugs in a handful of other diseases as well. Gilead has built out an impressive number of drugs that could one day be used to treat diseases in the hematology, oncology, inflammation, respiratory, and cardiovascular spaces.

One particularly promising space for Gilead is rheumatoid arthritis treatment. The current leading treatment for this disease is AbbVie's Humira. Humira was the world's best-selling drug last year, bringing in $3.6 billion last quarter alone. Although Humira is currently approved to treat far more than just rheumatoid arthritis, this indication clearly a huge market opportunity for Gilead to pursue. Keep an eye on Gilead's two phase 1 drugs in this therapeutic area.

Of course, all of Gilead's early-stage drug candidates still have years of development time ahead of them, and many of these compounds will likely fail before making their way to market. But since Gilead has such a long history of successfully bringing innovative new treatments to markets, I'd expect that at least one of these drugs will be a winner for the company a decade from now.

As my colleagues have pointed out, this company's pipeline is top notch. But it's Gilead's expertise at making cunning acquisitions that I believe will continue to drive its long-term growth. Gilead's ability to identify, acquire, and commercialize drugs is in a class of its own. The company's first blockbuster was the drug Viread, bought from a European lab in 1991, which it transformed into one of the most widely-used components in HIV drugs. A string of astonishingly successful acquisitions followed, including small U.S. biotech Pharmasset, which Gilead scooped up for $11 billion in 2011. Within three years, due to a series of bold, high-risk trials, Gilead had brought Pharmasset's molecule sofosbuvir to market as the mega-blockbuster Sovaldi.

Gilead faces some challenges, and it may not be able to keep good news flowing quarterly in the near term. But consider that 10 years ago, in 2005, Gilead's fiscal-full-year revenue was a measly $2 billion. This year, it is forecasting revenue of $30 billion to $31 billion. Ten years from now? No guarantees, but I expect this biotech will still be blowing us out of the water.

Where Will Gilead Sciences Be in 10 Years? @themotleyfool #stocks $GILD $ABBV Next Article
Current