All Fifth Street Finance (NASDAQ: FSC) wants for Christmas is a mulligan. After a rocky start to 2015, the company polished it off with more of the same.

The company posted net investment income of $0.18 per share in the fourth quarter, with capital losses of $0.20 per share. The result was net income of -$0.02 per share for the quarter.

Fifth Street Finance's net asset value (book value) fell to $9.00 from $9.15 per share quarter over quarter. Share repurchases totaling $20 million, and the reversal of some fees erroneously paid to the manager in prior periods helped buoy this quarter's NAV performance.

A cynical view
Critics and cynics will likely find the fourth quarter results encouraging, if only because it strengthens the case for an activist to shake things up at Fifth Street.

On Nov. 6, activist investor RiverNorth called for changing Fifth Street Finance's fee agreement, possibly seeking a new manager for the fund, and replacing some board members with RiverNorth's recommended slate of nominees. Curiously, RiverNorth is mentioned only 10 times in the annual report.

Investors who make their way to page 54 of the company's annual report will see why modifying the fee agreement is key to improving results for shareholders. I've reproduced a portion of the 10-K below. 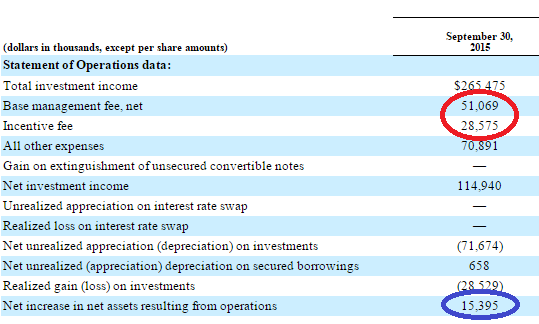 In the red circle are fees paid to Fifth Street Asset Management (NASDAQ: FSAM), which tally to about $79.6 million in fiscal year ended September 30, 2015.

In the blue circle are the true earnings for Fifth Street Finance shareholders, including capital gains and losses. Fifth Street shareholders collectively earned about $15.4 million for the fiscal year ended September 30, 2015.

In other words, for every $1.00 of wealth created for Fifth Street Finance shareholders, the manager received about $5.17 in base and incentive fees. Such is the problem with fee structures that reward income and ignore capital losses. 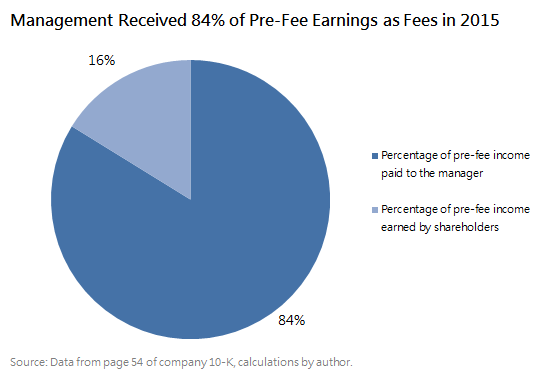 The fee structure remains the elephant in the room. Given incentives to create income and with no punishment for capital losses, Fifth Street has historically invested in higher-yielding (read: riskier) assets to generate current income at the risk of larger capital losses for shareholders.

Looking ahead
The portfolio is generally performing well, though some portfolio companies continue to be marked down. JTC Education, Phoenix Brands Merger Sub, and Answers Corporation were written down again in the most recent quarter. Ameritox and Integrated Petroleum Solutions also got a mark this quarter, and should be watched more carefully.

There was one big winner in the form of cooler company Yeti Acquisition, which was written up significantly in the fourth fiscal quarter.

The company warned that increased legal expenses -- presumably due to a class action lawsuit and an activist investor -- may negatively affect earnings going forward. On the conference call, executives noted that quantifying the impact would be almost impossible at the current time. Investors are right to question why these expenses should be borne by the BDC rather than the management team. We'll have to wait to see who picks up the tab.

If anything, the fourth fiscal quarter and full-year results show the need for change at Fifth Street.