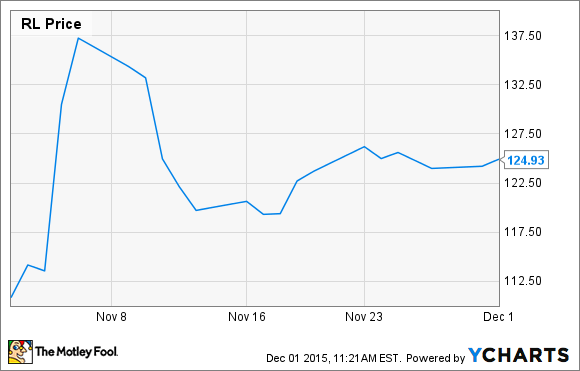 The company's spike was very noticeable when it reported. Data source: YCharts.com

What: While clothing has been a struggling category, Ralph Lauren delivered second-quarter net revenues of $2 billion, a 4% increase that the company said in its earnings release was driven by double-digit international growth. It also said it achieved a "better-than-expected operating margin of 13.5%, excluding one-time charges." It credited that to its global management structure and disciplined operation.

Part of the company's gain can also be attributed to optimism about the impact of new CEO Stefan Larsson who replaced founder Ralph Lauren on Nov. 1.

So what: Despite its positive results and the new CEO, Ralph Lauren still competes in a higher-end retail market, which has struggled.

"You saw PVH, which is Calvin Klein, Kors, and all these other guys having problems because of what Macy's (NYSE:M) said, OptionMonster Founder Jon Najarian on CNBC. "They all distribute through Macy's."

The large retailer reported a 5.2% drop in sales in its most recent quarter. It also said it expects a decline in comparable sales this fiscal year and it has warned about rising inventories in large retailers, including Macy's prior to the earnings release, The Wall Street Journal reported.

Now what: Najarian expects the stock to fall to its pre-spike level because the woes facing the rest of the industry and Macy's warning in particular. The holiday season will, of course, play a major part in where the stock price goes because if merchandise moves through -- even at a discount -- it creates shelf space to sell new stuff going forward.

Whatever optimism Ralph Lauren's new CEO created is at least somewhat tempered by the short-term negatives the company faces in the marketplace. There's nothing inherently wrong with RL and the company is in the midst of an aggressive global reorganization, but that might not be enough to fight short-term headwinds negatively impacting its key distribution channels.

This was a stock pop based on better-than-expected results and a long-wanted change in leadership. Larsson's appointment might set the company up well for the long term, but the company's immediate prospects are hurt by the market in which it operates.