Delta Air Lines (NYSE:DAL) surprised many investors earlier this year when it announced a massive $5 billion share buyback program. Delta had entered the year with more than $1 billion remaining on a $2 billion share repurchase program announced a year earlier, and this move signaled an even more aggressive approach toward returning cash to shareholders.

However, while Delta Air Lines holds the record for the biggest single share buyback program in the airline industry, its close rival, American Airlines (NASDAQ:AAL), has actually been more aggressive. It has executed a series of smaller buyback programs this year, and looks set to continue doing so during Q4 and throughout 2016.

Delta Air Lines outspent American Airlines on share repurchases during the first half of the year, buying back $1.35 billion of stock compared to American's $943 million. However, Delta's buyback activity is slowing in the second half of the year. Delta has projected that it will return a total of $2.5 billion to shareholders this year, including more than $350 million of dividends.

By contrast, American Airlines accelerated its share repurchases last quarter. In July, the board added another $2 billion to the buyback program. The company then spent a stunning $1.56 billion on buybacks during Q3, bringing the annual total to $2.5 billion. It added another $2 billion repurchase program in October, leaving it with a remaining buyback authorization of roughly $3.5 billion.

No reason to stop now
American's massive buybacks in Q3 were triggered by its stock spending most of the quarter trading 25%-35% below the all-time high it reached earlier this year. 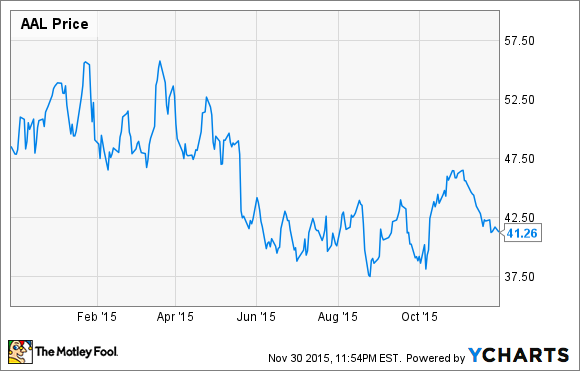 The stock started to recover in October, but it has since fallen back into a rut, mainly due to concerns about American's aggressive price-matching policy and potential demand destruction related to the Paris terrorist attacks. However, neither of these is likely to significantly damage the company's strong profitability, especially from a long-run perspective.

On the flip side, American Airlines completed a big integration task in October, combining the US Airways reservation system with its own. By avoiding major snafus there, it significantly reduced the likelihood of a profit meltdown. Additionally, jet fuel prices remain as low as they have been in years, which is a major earnings tailwind. 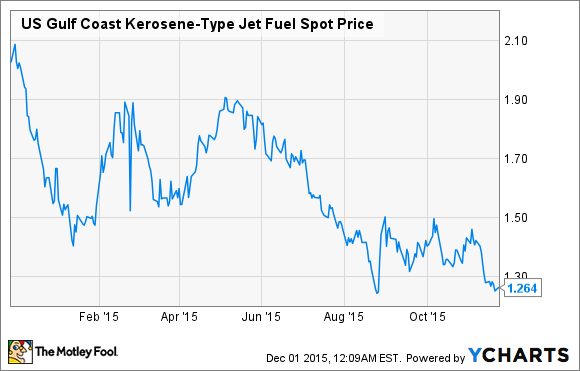 With earnings remaining strong and the stock price remaining depressed, the rationale for heavy share buybacks is as sound as ever. American Airlines can dramatically reduce its share count by repurchasing its stock, thereby boosting earnings per share. It had about $8.3 billion in unrestricted cash as of the end of September (excluding cash trapped in Venezuela), so it has plenty of firepower for buybacks, too.

As a result, American Airlines' share repurchases will probably remain elevated for the time being. At a minimum, it is likely to complete the existing authorizations of $3.5 billion by the end of 2016, which would be an average of $700 million in share buybacks per quarter.

However, there's a good chance that the company will increase its buyback plans again in 2016. American's heavy capex spending of the past few years will start to moderate next year before moving significantly lower in 2018. That will free up more cash for capital returns.

Furthermore, the current management team has shown in dramatic fashion this year that it is willing to prioritize buybacks over debt reduction when the stock looks cheap and financing costs are low. Until either the stock price or interest rates rise significantly -- or both -- large share buybacks will be a routine occurrence at American Airlines.