On Tuesday, SEC filings revealed that the activist investor group has amassed 1,782,500 shares of iRobot, representing a sizable 6.1% stake in the robot maker. For reference, that's up from the 1.5 million-share initial stake Red Mountain opened this past April.

This time, however, accompanying the increased stake was a letter from Red Mountain addressed to both iRobot's board and its co-founding chairman and CEO, Colin Angle. In it, Red Mountain outlines, "among other things, iRobot's history of poor stock price performance, lack of capital allocation discipline, and shareholder-unfriendly corporate governance practices." Red Mountain also provides what it believes to be the best path forward for iRobot, namely refocusing its business on achieving profitable growth and creating "substantial long-term value for shareholders."

Specifically, Red Mountain wants iRobot to not only discontinue its Remote Presence business -- consisting of robots based on its Ava telepresence platform -- but also to explore strategic alternatives for its government-centric Defense & Security business. In turn, Red Mountain says, iRobot would be able to focus on its more promising Home Robot business and the consumer end-market.

In addition, Red Mountain wants iRobot to "allocate capital with discipline and an intense focus on risk-adjusted returns [...] and address significant lapses in corporate governance."

Finally, Red Mountain wants iRobot to add new independent directors to its board and believes the board should "consider all other paths to maximize shareholder value, including a sale of iRobot as an alternative to the implementation of the proposed value enhancement plan."

Surprise?
That's not to say these demands are a complete surprise. Red Mountain has, after all, been prompting iRobot to refocus on the consumer sector since it opened its initial stake earlier this year.

With that in mind, iRobot issued its own statement in response, arguing, in part:

"While it is the Company's policy not to comment on specific discussions with stockholders, it is important to note that members of iRobot's Board and senior management team have held numerous discussions and meetings with Red Mountain over the last seven months, including a meeting with our Lead Independent Director and Chairperson of the Nominating and Corporate Governance Committee. Given our willingness to engage and discuss Red Mountain's viewpoints with a goal of resolving this situation constructively, we are surprised that they have determined to take this course of action."

iRobot also highlighted its existing effort to put its growing cash pile to use through its $50 million stock repurchase program. iRobot has already repurchased $27 million in shares under that program, including $20 million last quarter alone. For additional perspective, note that iRobot's most recent repurchase program replaced a similar $50 million authorization approved in April 2014, which itself followed a $25 million buyback approved in early 2013.

In addition, iRobot says its board recently approved a separate "anti-share dilution repurchase program," under which it will buy back up to 1 million shares annually beginning in 2016.

Finally, iRobot insists that it regularly evaluates strategic options and priorities for capital deployment, including a "range of options" associated with its 2016 operating plan.

Why iRobot is right
Of course, it's hard to argue that iRobot stock has left investors underwhelmed in recent years. iRobot shares are down significantly from their early 2014 highs and remain up just 25% since the day after its IPO in November 2005, even as the S&P 500 more than doubled over the same period: 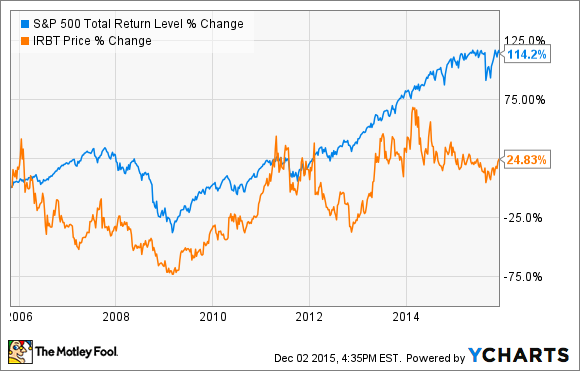 But apart from the obvious economic headwinds that came with the broader market crash in 2009, investors largely owe iRobot's underperformance to the fall from grace of its Defense & Security business, which formerly comprised the bulk of its revenue before U.S. defense budget cuts came into play in 2012.

However, while it might seem logical to step out of the Defense & Security business altogether, there are a number of reasons this doesn't make sense. For one, recall iRobot promptly restructured its Defense & Security business more than two years ago, including reductions in force to ensure that its cost structure continually remains consistent with D&S revenue expectations.Consequentially, iRobot is already placing much of its focus on seizing the multibillion-dollar growth opportunity in Home Robots.

Next, iRobot's Defense & Security business ironically began to show encouraging signs of life in recent quarters; D&S ended last quarter with a healthy backlog of $28 million and secured multiple large contracts in October worth as much as $96 million. In addition, Angle told investors in July that there are a "few programs of record for small robots" for which iRobot is competing that are "hundreds of millions of dollars in scale" and could drive significant growth for the D&S segment in the coming years.

Meanwhile, iRobot's Remote Presence business remains in its infancy and is only expected to contribute around $3 million in total revenue this year. But it's also more than just an expensive distraction. Keep in mind, for example, that iRobot's Ava platform technically used the company's high-tech V-SLAM (visual simultaneous localization and mapping) navigation technology long before it was commercialized in the Home Robot segment's Roomba 980 robotic vacuum. And this complementary nature of iRobot's R&D also extends to the D&S segment, so it stands to reason that simply divesting or discontinuing these peripheral businesses would almost certainly have far-reaching negative repercussions on the very segment to which Red Mountain hopes to shift iRobot's focus.

In the end, I fear Red Mountain's proposal is, more than anything, a misguided attempt to unlock value from a business that's already effectively positioned to do so. iRobot is right to resist these changes and should continue on its current, long-term oriented path.