Mr. Market clearly doesn't think much of Macy's (NYSE:M) right now. Shares of the top department store company climbed steadily from 2009 through mid-2015, but they have since lost nearly half of their value. 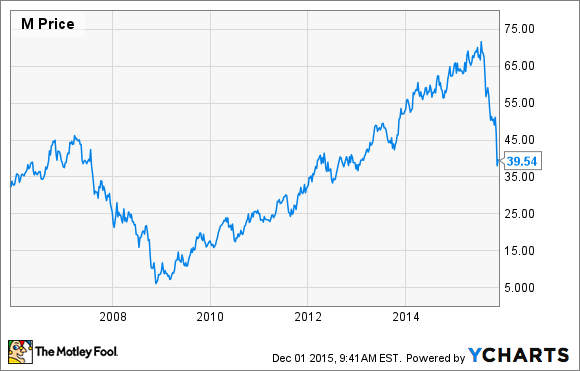 Yet there are several superbulls in the hedge fund world who think Macy's could quickly more than double its stock price by monetizing its real estate in one way or another. However, while there is clearly untapped potential in Macy's real estate, these analysts are probably overestimating the amount of value that can be unlocked.

Macy's stores in downtown Chicago and San Francisco are also probably worth more than $1 billion apiece. Another large Macy's store in downtown Minneapolis and the Bloomingdale's flagship in New York are quite valuable, as well.

Macy's also owns hundreds of its mall-based stores, but these are much less valuable. When J.C. Penney (OTC:JCPN.Q) needed to tap its real estate for cash in 2013, its 306 owned stores and 123 ground-leased stores were appraised at a combined $3.3 billion.

Macy's mall-based real estate is clearly worth more than that. First, it has 37% more retail square footage than J.C. Penney. Second, two-thirds of its locations are owned or ground-leased, compared to just 40% for J.C. Penney. Third, Macy's has a higher proportion of its stores in top-tier malls than J.C. Penney. Finally, real estate values have gone up since the J.C. Penney stores were appraised.

Just how much value is there?
Based on the figures presented above, Macy's real estate is almost certainly worth more than $10 billion. Just how much more is an open question, though.

Hedge fund manager Jeffrey Smith of Starboard Value claimed back in July that Macy's real estate is worth $21 billion. As a result, he pegged the stock's value at $125: nearly double where it was before his presentation and more than triple its current level.

More recently, Jeremy Skrezyna -- until lately a hedge fund analyst at Andalusian Capital -- put an even higher value of $26 billion on Macy's real estate. (Skrezyna ended up with a lower value of $90 for the stock, though -- perhaps based on lower expectations for the remaining retail company.)

Yet other analysts are much less bullish about Macy's real estate value. "[I]t would take some crazy valuation math to come up with $21 billion for the whole portfolio," said Gimme Credit director of research Carol Levenson in Fortune earlier this year.

It's possible that the bullish estimates putting Macy's real estate value above $20 billion are accurate. But investors shouldn't treat that as a certainty.

Market rent would torpedo Macy's profitability
Even if we suppose that Macy's real estate portfolio is worth $21 billion, it would be improper to simply add $21 billion to the company's current market cap to estimate its intrinsic value.

If $21 billion is the true value of Macy's real estate, then a market rent for these properties in a sale-leaseback (or spinoff-leaseback) scenario would be about $1.5 billion per year, based on a 7% cap rate. Yet over the past 12 months, Macy's has generated free cash flow of just $1 billion.

The rent payments would be tax-deductible -- bringing the net cost to about $900 million -- and Macy's would save some capital expenditures spending if store-building costs were shouldered by the real estate portion of the company. Nevertheless, the remaining retail company would not make much money if it were locked into market-rate leases. It would, therefore, be worth a fraction of its current value.

Macy's appears to have done an analysis along these lines. CFO Karen Hoguet stated bluntly last month that the board had evaluated spinning off Macy's real estate into a new REIT and found that it wouldn't create much if any value for shareholders.

Indeed, Macy's bulls might want to look at the example of Hudson's Bay, which has pursued a real estate monetization strategy similar to what many hedge fund managers want Macy's to follow. Shares of Hudson's Bay surged in late 2014 and early 2015 as a pair of joint ventures "unlocked" real estate value. But those gains proved ephemeral and have nearly vanished since July.

Creating real value
Rather than trying to unlock the value of its real estate through financial wizardry, Macy's is taking a more direct -- albeit slow -- approach toward monetizing its real estate. This primarily involves selling off underutilized portions of stores that sit on valuable real estate. It could also extend to closing underperforming stores in order to sell those sites.

Moves like this may net billions of dollars in sale proceeds that could be returned to Macy's shareholders through dividends or share buybacks. And unlike sale-leaseback arrangements, they wouldn't saddle the company with high rent payments that would sap its profitability.

The upside isn't quite as big as some Macy's bulls might have hoped. Nevertheless, this is a sounder strategy than any of the plans coming from the hedge fund world.