Now an extended shopping event that starts on Thanksgiving evening (if not earlier) for many retailers running through early morning sales on Friday, then into the full day with more deals on Saturday and Sunday before giving way to Cyber Monday, Black Friday is more a concept than a day. Still, the traditional kickoff to the holiday shopping season brought in big business.

Despite the expanding buying season, more than 151 million people in the United States said they shopped either in stores and/or online on Thanksgiving Thursday or Black Friday, according to the National Retail Federation's Thanksgiving Weekend Survey conducted by Prosper Insights & Analytics,

"Holiday shopping started well in advance of Thanksgiving weekend this year, but there's no question that people were still incredibly eager to get their hands on the deals that retailers were offering on electronics, apparel, toys and even small appliances," said Prosper's Principal Analyst Pam Goodfellow. "The ease of online shopping through mobile devices now lets millions of people research what they want as well as make timely purchases any day of the weekend -- a win-win for both retailers and shoppers."

That's a big change from how things worked in past years and it led to some clear losers during the 2015 Black Friday shopping season.

More bad news for Sears and Kmart
While a number of retailers drew decent in-store crowds while also doing increased online business the two Sears Holdings (NASDAQ:SHLDQ) brands look to have failed on both fronts. The chain bucked the current trend of opening in late afternoon or early evening on Thanksgiving and instead opened its doors at 6 a.m. on the holiday.

That looks to have been a mistake as staffers from The Street found that "stores were alarmingly absent of traffic and overstuffed with clothing inventory," during seven visits to various locations over the two-day period. The website found similarly dismal crowds at Kmart noting that "by 10:00 am, Kmart stores were dead as a doornail" and pointing out that crowds were less robust than other retailers even at their busiest.

Sears has not commented on its Black Friday sales but its hard to imagine that either brand made up for lackluster in-store crowds with digital sales.

Tired of the #BlackFriday crowds? Head to Sears, stores are as dead as its future $SHLD pic.twitter.com/7O6tTtEkII

Microsoft stumbles a bit
While the discounted Xbox One was a big seller according to Adobe, Microsoft's (NASDAQ:MSFT)efforts to win more market share for Windows 10 tablets looks to have hit a roadblock. The Adobe research called Apple's iPad Mini and iPad Air top sellers and noted that Amazon's Kindle Fire 7" 8GB model, which was being sold for $34.99, down from $50, was one of the five products most likely to be out of stock.

Similarly InfoScout's research showed that iPad remained at the top of the sales chart while the low-priced Kindle Fire was not only Amazon's top-selling item, it was also the biggest mover for Best Buy. This doesn't necessarily doom Microsoft's efforts in the tablet space, but people who buy iPads and cheap Kindles probably won't be buying high-end Surface hybrids or low-cost Windows 10 tablets anytime soon.

By selling well Apple and Amazon are effectively taking customers off the board in the tablet space which is bad news for Microsoft.

Big retail mostly was down
In the end the success or failure of any chain during the holiday shopping season will no longer be judged just based upon Thanksgiving and Black Friday sales numbers. That's good news for many because overall sales fell for most retailers, according to data culled from 300,000 Americans by InfoScout. 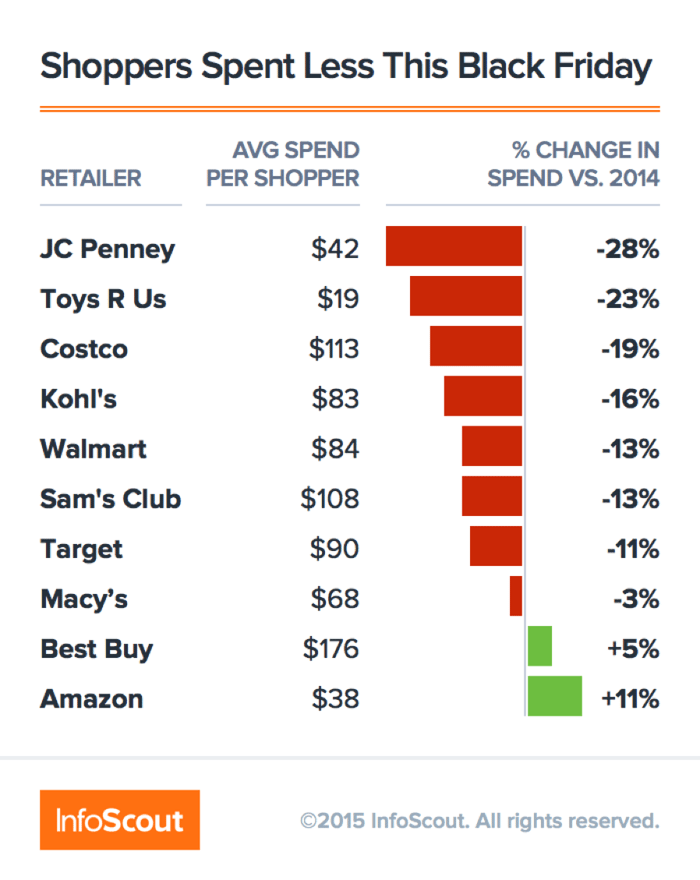 As you can see on the chart above even chains like J.C. Penney (OTC:JCPN.Q) which produced strong foot traffic, saw people spend less money. That makes that particular retailer both a winner (because at least people are back to considering shopping there) and a loser this holiday season (because they only culled the best deals).

And, since the chart considers both in-store and online purchases, the data suggests that at least for the two-day "Black Friday" period consumers were simply spending less money.

Of course, the extended shopping season means that these numbers should be taken with a grain of salt. The losers on this list may make up their losses with sales made before Black Friday and sales leading up to Christmas. Still, these numbers cement that what was once a one-day shopping frenzy has faded in importance.

That's bad for retailers because it extends advertising expenses through a much longer period and it removes the certainty which was once generated by big Black Friday numbers. The holiday season may not end up as a loss for any of these retailers, but for the traditional ones, the changing shopping patterns may well be a long-term negative.