Matthew Frankel, CFP®, Selena Maranjian, Dan Caplinger, Brian Stoffel, and Jason Hall
(TMFMathGuy)
Author Bio
Matt is a Certified Financial Planner based in South Carolina who has been writing for The Motley Fool since 2012. Matt specializes in writing about bank stocks, REITs, and personal finance, but he loves any investment at the right price. Follow him on Twitter to keep up with his latest work! Follow @TMFMathGuy 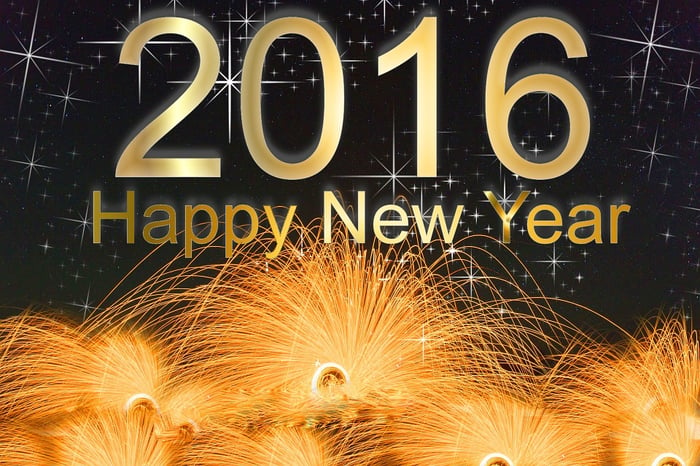 With 2015 rapidly coming to a close, it's time to start thinking about 2016 and which stocks could be well-positioned to deliver strong performance. Some stocks that were obliterated this year are in a nice position to rebound, while others have been growing rapidly and should continue to do so. With that in mind, we asked five of our experts to share some of the stocks they have on their radar as we head into the new year.

Brian Stoffel: Shares of GoPro (NASDAQ:GPRO) have been obliterated during the second half of 2015. After topping out at $65 per share in August, the stock has lost over 70% of its value. It's not without reason: some worry that GoPro's cameras could eventually be commoditized. Bears point to the overall failure of the company's Session camera -- and the subsequent drop in the camera's price tag -- as evidence that this is already beginning. Revenue and earnings are both expected to fall in the company's 2015 holiday quarter.

But all hope is not lost. Long-term investors have three different catalysts that could move GoPro significantly higher in 2016. The first is the release of the company's quadcopter camera -- which management has said will make an appearance in the first half of 2016. GoPro has already provided a teaser of what the camera will be able to do.

The company has also been making heavy investments in virtual reality. It announced that a new rig, dubbed Odyssey, will be available starting at $15,000. While that might sound steep, the company has already shown what it can do for folks who want to take a virtual stroll in New York City. Expect early adopters to test it out and cheaper iterations to show up in the future.

The final catalyst is the company's moonshot. GoPro is trying to become a vertically integrated video production company. That's no easy feat. It is pushing these efforts forward by starting its own channel on YouTube and other platforms, as well as giving away annual awards totaling $5 million for content creators.

If any one of these three catalysts "hit" next year, 2016 could be very good for shareholders.

This homebuilder's stock was up more than 35% at one point in 2015, but after reporting earnings that the market didn't like for the past couple of quarters, it's now back to where it started the year. 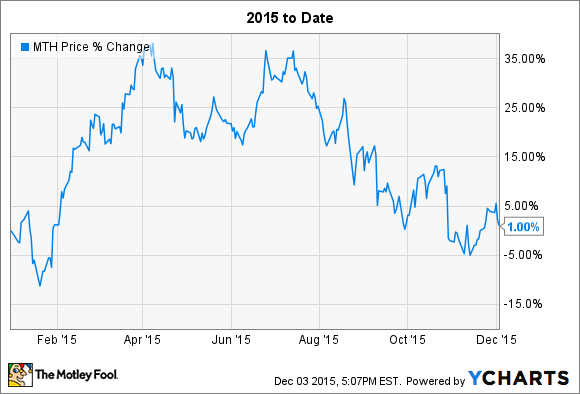 The thing is, the troubles that Meritage is dealing with are short-term in nature, and investors are looking past the fundamental strength of the housing market.

Meritage's two biggest problems this year have been weather and labor. One of the company's strongest markets has been Texas, but torrential rains in the spring and summer essentially ground building to a halt for more than a month, as well as having a similar effect in Colorado. Meritage isn't the only builder in this situation, and that's compounded what was already a tight labor market, with so many builders trying to make up for lost time.

Not only has this put Meritage behind in its central region, but the heavy competition for labor has pushed up labor costs for every builder in the affected markets, and that's been a drag on earnings.

Bottom line: These are short-term problems, and the overall housing market in most of Meritage's markets is strong. Even with the expected rate increases coming, Meritage is well-positioned to benefit from solid demand for new homes and a relatively good economy. Savvy investors should think about buying shares of Meritage while they are beaten-down.

Matt Frankel: One stock that could have a great 2016 is Square (NYSE:SQ), the credit card processing company that recently issued its IPO.

After a successful first few days that saw shares rise from their $9 IPO price to nearly $15, Square has fallen back to Earth, and currently trades for around $12. This represents a valuation of slightly less than $4 billion, which is far below the $6 billion valuation given during the company's 2014 private equity funding.

There are several reasons why Square may not be trading at a higher valuation, including increased competition from Apple Pay and offerings from Visa and MasterCard, but the top concern of investors is Square's ability to earn a profit. Revenue is increasing at an impressive rate, and more than tripled from 2012 to 2014, however expenses have increased even faster, resulting in growing losses each year.

If CEO Jack Dorsey can figure out a way to make Square's increasing revenue translate into profits, or at least start to shrink the losses, the company's stock could rocket upward quickly. It's important to keep in mind that's still a big "if" at this point, but a company with this level of revenue growth has a lot of potential if it starts to look like it's going to make money.

Dan Caplinger: One stock that could spice up your portfolio in 2016 is Chuy's Holdings (NASDAQ:CHUY). The company behind the fast-growing Tex-Mex restaurant chain is ramping up on its growth, with eight new restaurant locations through the first three quarters of the year bringing its total to 67. From its origins in Texas, Chuy's has done an impressive job of spreading throughout much of the Southeastern U.S., and it has steadily spread outward from its base audience to tap into new markets with high potential. Positive comparable-restaurant sales demonstrate the loyalty that Chuy's builds among those who give it a try.

It's important to keep Chuy's performance in perspective, as its sit-down experience is much different from the fast-casual giant that most investors immediately think of in relation to Mexican food. Moreover, the company is vulnerable to the same challenges that many restaurant peers face, including the threat of food-cost inflation and an increasing competitive industry environment. But Chuy's has done a good job keeping its irreverent attitude even as it grows, and Tex-Mex connoisseurs throughout the nation can appreciate the chain's affordable pricing and unique ambiance. Chuy's has rebounded sharply in 2015, but it should still have room to spice up portfolios in 2016 as well.

For example, Amazon has been adding a lot more to like for its customers, such as original video content for its Prime subscribers, grocery deliveries via its Pantry service, and devices such as its Fire TV, Fire Tablet, Kindle, and Amazon Echo -- which sold particularly well during the Thanksgiving holiday. It keeps adding more offerings, too, with drone deliveries a definite possibility. It's aiming to make big bucks by hosting advertising on its myriad pages, too. Meanwhile, it expects "a record holiday season."

In its last quarter, Amazon posted revenue up 23% year over year, with net income swinging from a loss to a gain. The company has posted many years in the red, but that isn't worrying many investors, who are content to have the company investing aggressively in further growth, with the assumption that it can simply rein in its spending whenever it wants, generating bigger profits. It's daring to bet against Amazon. The stock has averaged annual gains of nearly 25% over the past 15 years. Its coming year is likely to be strong, too.