Natural resources conglomerate Freeport-McMoRan (NYSE:FCX) found itself in the worst of both worlds in 2015. The commodities bust had already sent prices of copper and gold falling long before the year began, putting Freeport in a tough situation.

Yet when oil prices started to plummet toward the end of 2014, Freeport saw the energy business that it had worked so hard to integrate into its operations start to misfire. That combination was brutal to shareholders in 2015, sending Freeport's shares to much greater losses than pure mining play Southern Copper (NYSE:SCCO) and other mining peers. Let's take a closer look at what Freeport had to deal with in 2015, and how it can get out of its current woes.

What has happened to Freeport-McMoRan in 2015?
Freeport-McMoRan has had to suffer through successive waves of damage throughout the year resulting from the carnage in the oil and gas industry. In its fourth-quarter results in January, Freeport took the first of several multi-billion dollar charges to make required regulatory adjustments to the value of its energy assets based on prevailing market prices. Copper and gold sales fell due to declines in volume and pricing, and total energy production for the quarter fell by more than 25%, reflecting asset sales during the previous year.

Shortly thereafter, Freeport gave dividend investors bad news, slashing its payout by more than 80%. The company identified the need to preserve cash; but even the loss of confidence among income-seeking investors didn't have that much of a downward impact on share prices immediately after the announcement. Some saw the measure as necessary for Freeport's long-term survival, and applauded the decision.

By mid-year, it was apparent that Freeport wouldn't see a quick rebound in oil prices to help stabilize its financial performance. Sales dropped by 23% in the second quarter, with Freeport taking another $2.7 billion impairment charge, and profits were far weaker than previous-year results even excluding the impact of the energy-price-driven impairments.

A rebound in gold and copper production wasn't enough to offset continued price declines, and the company began discussing ways for its ailing oil and gas business to generate more cash through further asset sales, or an initial public offering of equity in the unit. In the end, Freeport used an unusual financing strategy involving at-the-market sales of its own shares, but it still left open the possibility of other cash-raising moves going forward. 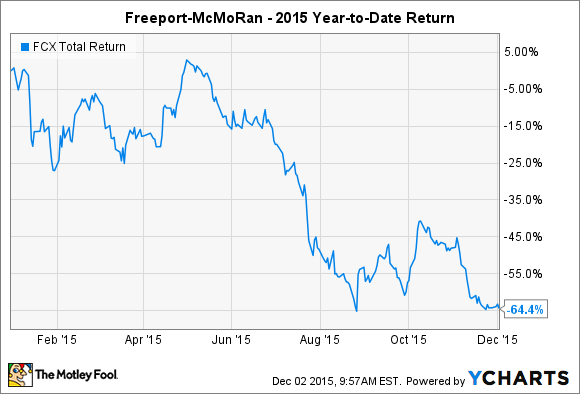 Most recently, the results that Freeport announced in October showed deteriorating confidence in both energy and mining. A $3.7 billion reduction in the carrying value of Freeport's oil and gas assets was the largest yet, and copper sales volumes fell by 6%, exacerbating the impact of a full 25% drop in realized copper prices. That's not inconsistent with what Southern Copper has said, with Freeport's copper rival seeing profits fall 70% from year-ago levels during its third quarter. Nevertheless, Southern Copper doesn't have to deal with the huge drain from Freeport's oil and gas business, and that continues to be a cause of concern for Freeport going forward.

What's ahead for Freeport?
The biggest problem that Freeport faces is that its energy unit is likely to have to endure yet another impairment charge in the fourth quarter. The reference price for crude oil reflected in Freeport's books is nearly $60 per barrel. With current oil prices closer to $40, there will be a further need for adjustments if oil doesn't rebound soon.

More broadly, though, Freeport is in a fight for its life, as both oil and copper have seen their prices fall to levels not seen in years. With few signs of a broader global macroeconomic recovery that would help lift commodity prices from their current lows, Freeport-McMoRan investors might well have to deal with similarly poor performance in 2016.