Rockwell had a tough quarter, but there's more to know than just that, and here are a few key takeaways from the company's conference call

Rockwell Automation's (ROK -0.67%) fiscal fourth-quarter results were pretty weak. That's the headline news. But it isn't the only information you should take from the quarter. Here are five things, both good and bad, that you should know that the company's management pointed out during the conference call.

Things are slowing down
Reviewing the third quarter of 2015, CEO Keith Nosbusch noted, "As we progressed through the quarter, conditions softened." That situation led to the forward-looking comment later in the presentation that "we are expecting fiscal 2016 organic sales to be flat to down 4% year over year." 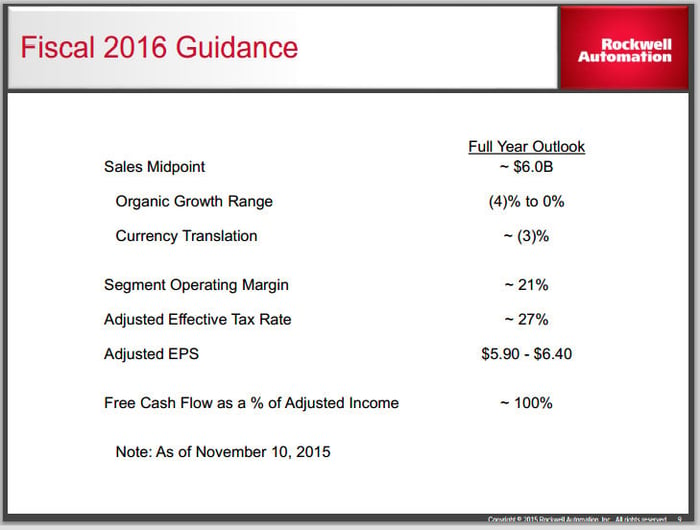 Some of the reasons for this slowdown are the weakening Chinese economy, troubled oil and gas markets, and slower-than-expected growth in the United States. So things are bad right now, but clearly Rockwell doesn't think the near future will be any brighter.

That's not so good, but it's worth noting that this negative outlook isn't unique. For example, Eaton Corp. (ETN 0.60%) has steadily lowered its growth expectations throughout 2015, starting the year with an organic growth target of 3% to 4%, which has now dropped to a decline of 1%. As for Eaton's initial outlook for next year: "Markets expected to be slightly negative in 2016."

Currency is a big headwind
Like other companies that operate on the global stage, currency was a big problem. According to the CEO, "Currency was an even larger headwind than we expected, reducing sales by 8% year over year." This is something that's really out of Rockwell's control. And it's making results look particularly weak right now, even though currency impacts have a habit of washing out over time.

And, again, Rockwell isn't alone. Currency headwinds were a 6% drag on Eaton's sales in the quarter. ABB (ABB 1.15%) meanwhile, saw revenues decline 2% in the third quarter if you pull out currency fluctuations, but 13% when you leave them in. This is a problem, but Rockwell is in good company.

Cash is king
So sales and earnings are important, but even more so is cash. That's how you pay your bills. On the cash front, Nosbusch was proud to highlight that "free cash flow conversion was excellent, resulting in record free cash flow of about $1.1 billion." In other words, even in trying times, Rockwell has been able to produce results where they count. 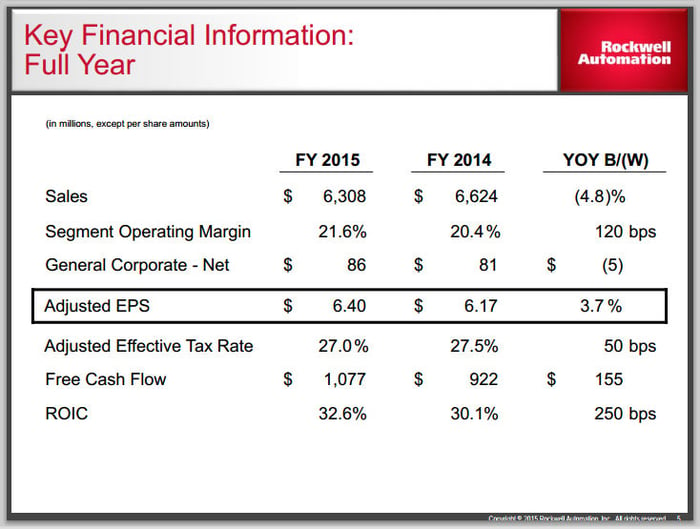 If you're concerned about the headwinds, highlighted by the fact that the company's fiscal 2016 guidance calls for earnings to be at best flat with the current fiscal-year tally, step back for a moment. The company increased its dividend 12% in the quarter. It could do that because of its ability to generate cash. And it's unlikely that Rockwell would have increased its dividend if it didn't think it was capable of keeping it at the new level. That's the power of cash. Everyone watches earnings, but cash is king and Rockwell is doing a good job of turning sales into cash flow.

Operating excellence
Part of the strong cash flow is running a lean, mean machine. For example, the CEO noted, "Segment margin improved 120 basis points due to excellent execution." In other words, despite the tough market, Rockwell was able to increase the amount of money it earned on every dollar of sales. But the company's not done.

While discussing results, CFO Theodore Crandall noted that Rockwell took $12 million worth of restructuring charges in the quarter. Why? According to the CFO, "We took the restructuring charges to get our cost structure more aligned to the outlook for fiscal year 2016." So the company isn't sitting still; it's shifting gears to deal with softening end markets. That's the right thing to do and should make shareholders feel more confident in the company's ability to meet its fiscal 2016 targets -- and its ability to keep turning sales into cash flow.

Returning value
Another important takeaway from the quarter was that Rockwell is trying to return value to shareholders. A 12% dividend increase is part of that process, but so, too, was the purchase of 1.8 million shares in the quarter. For the fiscal year, the company bought 5.4 million shares for a total cost of $606 million. According to CFO Crandall, "That's almost 30% more than the $470 million in repurchases that we projected at the beginning of the year, and related to our strong cash flow performance."

Every share the company buys back is one less share that earnings have to be spread over. That helps improve performance for existing shareholders. Since the industry headwinds have kept the shares range-bound of late, now seems like an opportune time to put cash to work in this manner. Add that to the dividend increase, and it looks like Rockwell is trying to make sure shareholders benefit from the cash flow it's generating, even if the earnings picture looks less than exciting.

So in many ways it was a tough quarter for Rockwell Automation. But the company wasn't alone, as peers such as Eaton and ABB also felt the sting of slowing markets. That's a key takeaway, as is the fact that tough market conditions are likely to persist for a little while. But beneath that negative, Rockwell continues to perform well operationally and is generating plenty of cash -- money it's using to the benefit of shareholders. It looks like the quarter contained a few positives after all, if you were willing to look past the headlines.

Why GrafTech International Shares Are Down Today