Daniel Miller, Steve Symington, and Todd Campbell
(TMFTwoCoins)
Author Bio
As a Motley Fool Industrial Specialist, I use my marketing and business background in the automotive industry to evaluate major automakers and other large industrial corporations. Follow me on twitter for tweets about stocks, cars, sports, and anything I find amusing. Follow @DanielMillerTMF

Though Altria Group (NYSE:MO) operates in the challenging U.S. tobacco industry, thanks to cigarette volume remaining in secular decline, the company controls roughly 50% of the U.S. cigarette market and continues to dish out a dividend yield of nearly 4%. However, despite the challenging market, the company's addictive products provide the company with strong pricing power that should keep Altria's cigarette business lucrative in the near term.

If Altria isn't your style, three Foolish contributors offer strong dividend stocks that should have brighter futures than Altria.

Todd Campbell: Altria may have this company beat in terms of dividend yield, but in terms of long-term dividend potential, I don't think Altria can hold a candle to Microsoft (NASDAQ:MSFT).

Microsoft is reinventing itself as a giant in cloud-based services, and its Office-anywhere approach is solidifying its de facto standing as the dominant player in productivity software.

The company's Windows 10 rollout has gone about as smoothly as any launch in its history, and with 110 million installs and counting, it could be on more devices than any of its predecessors. That's great news given that Microsoft is showing a special knack for cross-platform integration.

Besides landing itself on increasingly more devices, Microsoft is also doing a solid job of tying together its services so that they naturally lead to sales growth. Integrating Cortana and Bing deeply in Windows 10 provides natural tailwinds for search revenue, and connecting Xbox to Windows 10 is an early move into un-connected gaming that frees players from a specific medium, such as the TV.

Add together all of the things Microsoft is doing right and the fact that the company is sitting on a dump truck full of dividend-friendly cash and you can see why I believe its current 2.67% dividend yield is competitive enough to warrant buying it instead of Altria.

Daniel Miller: AbbVie Inc (NYSE:ABBV) has a dividend yield similar to Altria, currently sitting at about 3.8%, but its future seems much brighter. AbbVie has a trump card in the form of an immunology drug named Humira, which is going to drive very strong cash flows for the company despite its patent ending at the end of 2016. That cash flow will help fund research and development to fill the company's pipeline of future drug products.

A quick glance at AbbVie's near-term prospects is enough for investors to remain optimistic about the stock. The company expects to deliver top-tier revenue growth through 2020, with total company sales reaching roughly $37 billion in 2020, compared to nearly $20 billion in 2014. 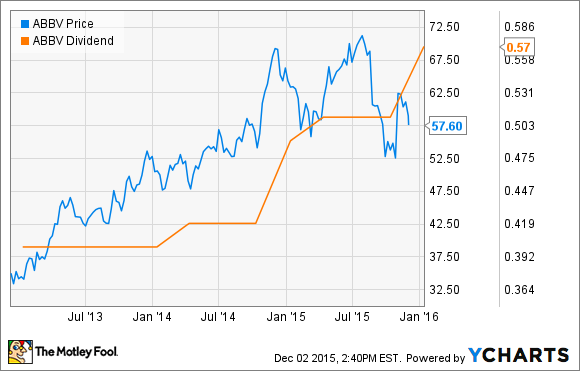 That all equates to AbbVie forecasting double-digit adjusted EPS growth on average through 2020. Currently, the stock trades at roughly 12 times forward earnings, and after upping its dividend by 12% last quarter, the company has a promising future in terms of growing its sales as well as its dividend.

Steve Symington: Altria may boast a solid 3.7% annual dividend yield, but I think Nike (NYSE:NKE) offers a much healthier combination of dividend growth and potential share price appreciation -- not to mention the stark contrast of Nike's exercise-centric products against those of the tobacco giant. Of course, past performance can't guarantee future results, but consider Nike's relative outperformance for both metrics over the past five years: 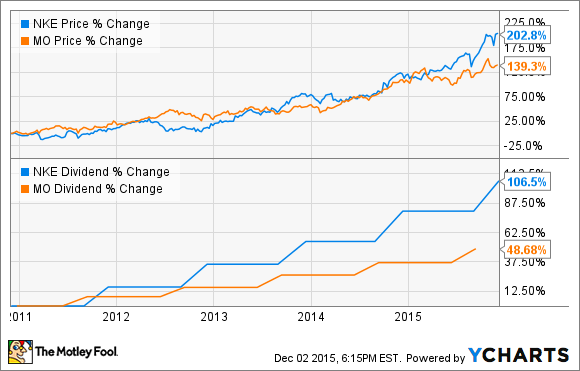 In October, Nike also indicated it has no intention of slowing down, announcing a new target to achieve $50 billion in annual revenue by the end of its 2020 fiscal year -- a more than 50% increase over this year's (fiscal 2016) expected revenue of $32.8 billion. At the same time, Nike aims to expand gross margin each year by 30 to 50 basis points, achieve average annual earnings-per-share growth in the mid-teen percentage range, grow free cash flow faster than net income, and achieve impressive returns on invested capital in the high-20% to low-30% range.

Altria bulls might also point to their company's recently authorized $1 billion share repurchase program (which it expects to complete by the end of next year) as a solid supplementary effort to return capital to shareholders. But keeping in mind both companies have nearly identical market capitalizations (at around $113 million), and Nike's float is significantly smaller (with shares worth $89.3 billion vs. Altria's $112.8 billion), Nike repurchased 5.5 million shares of its own stock for $588 million last quarter alone, leaving roughly $1.5 billion remaining under what was originally an $8 billion authorization set be exhausted by the end of this fiscal year. In addition, when Nike boosted its quarterly dividend by 14% two weeks ago, its board of directors approved an even more ambitious four-year, $12 billion repurchase authorization to commence when the current program completes.

Forget Altria, These Are the Best Dividend Stocks to Own @themotleyfool #stocks $MSFT $MO $NKE $ABBV Next Article
Current