What: Shares of Oncothyreon (NASDAQ: ONTY), a clinical-stage biotech developing therapies to treat cancer, rose by more than 9% in November, according to data provided by S&P Capital IQ. The catalyst driving the biotech's shares higher for the month was the announcement that the company would be providing a clinical update for its experimental HER2-positive breast cancer treatment, ONT-380, at the San Antonio Breast Cancer Symposium being held from Dec. 8-12 in San Antonio, TX. ONT-380 is a small molecule inhibitor of HER2 invented by Array BioPharma (NASDAQ:ARRY) and licensed to Oncothyreon under a broad manufacturing and commercialization agreement. 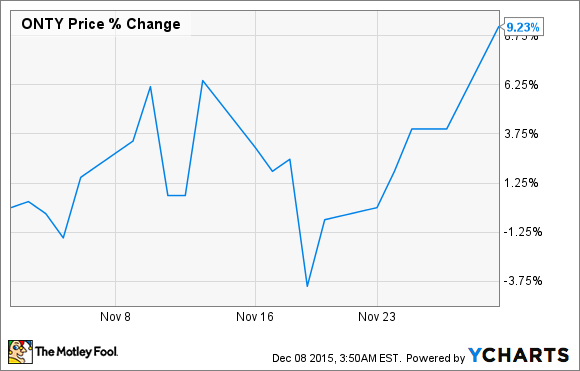 So what: Oncothyreon is currently assessing ONT-380 as a potential treatment for advanced breast cancer in a handful of early stage studies when used in combination with Herceptin and Kadcyla.

Although ONT-380 is probably a couple of years away from an actual regulatory filing, it does offer an exciting value proposition for investors, given that the HER2 positive breast cancer drug market is expected to grow to around $8 billion by 2023, according to the research firm GlobalData. In light of Oncothyreon's current market cap of only $308 million, ONT-380 wouldn't need to grab much of this monstrous market to be a huge value driver for the company -- even when factoring in the double-digit royalties that would need to be paid to Array BioPharma if the drug is approved.

Now what: Oncothyreon is in the middle of deciding how best to proceed toward a regulatory filing for ONT-380. Per management's recent comments, the current plan is to first evaluate the results of ONT-380's early stage trial in combination with Kadcyla, and then consider approaching regulators about the best path forward. Fortunately, investors should gain some insight into the drug's clinical progress this week. Until then, however, I'm personally content to watch this small-cap biotech from the sidelines.