What: Shares of Hi-Crush Partners (OTC:HCRS.Q) climbed more than 34% in the month of November. The largest reason for the company's surge was the fact that it was able to renegotiate some of its debt in a way that suggests the company will be able to hang on for a while longer through the downturn.

So What: Before we jump on the bandwagon of this increase in share price, let's keep in mind that Hi-Crush's shares are still down 78% for the year. So it will take a lot more than last November's surge to put a dent in all the losses we have seen so far this year. 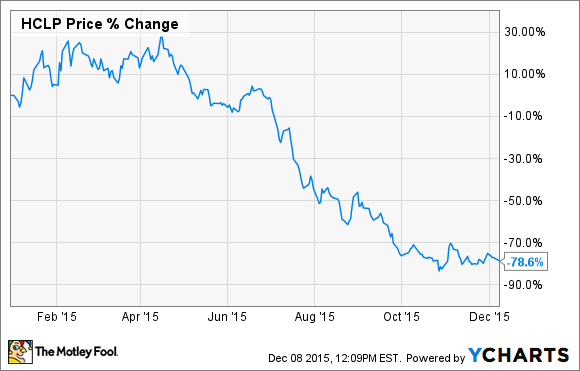 What mostly gave Hi-Crush its big gain in November was when the company announced that it had come to an agreement with its lenders to amend its credit facility. As part of the deal, banks will waive existing compliance ratios until 2017 in exchange for an agreement that the company set shareholder payouts at 50% of distributable cash flow after effective debts are paid as well as an interest rate hike. It's far from a great deal, but at least it will allow Hi-Crush to keep the lights on while the market for frack sand is extremely weak.

Now What: Having a company get orders from banks on how to spend their cash flows is not a sign of financial health by any means. Sure, it may help Hi-Crush work through the market downturn, but those restrictions will also likely make it difficult to ramp back up when the market does turn. Considering that there are other frack sand stocks that appear to be in better financial standing, and will likely see similar upside potential when the market turns, it's hard to get enthused about picking up shares of Hi-Crush.