So what: Plains' earnings report likely wasn't the only reason that shares fell last month. Some of it had to do with the fact that the entire master limited partnership space plunged close to 10%. With a strong headwind like that, it would be hard not to see a significant decline. 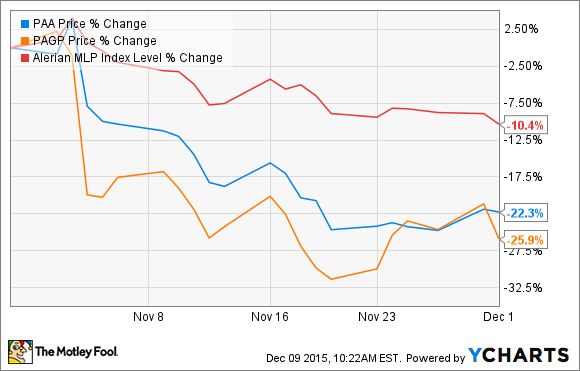 But still, the dive following last quarter's earnings announcement looked rough all around. Plains' distributable cash flow was reduced by 8%, which combined with management's decision to raise its distribution to shareholders meant that the company was paying out much more than what it was bringing in from operations. If that sounds suspicious to you, that's because it is. Nor does it help Plains GP Holdings' case, since its sole revenue source are equity ownership and incentive distribution rights on Plains All American.

Management has said that a slew of new projects coming on line will boost cash flows to cover future distribution payments and that it has ample liquidity to cover any immediate shortfalls. Considering the fate of so many other MLPs in recent weeks, though, it looks like Investors aren't buying it this time around.

Now what: Whenever a company's distribution falls to the levels that Plains' has, it has normally been a sign that some big changes are coming down the pike. Shares of Plains have dropped more than 56% in 2015, which makes the possibility of issuing new equity very unappealing. Probably the best course of action with Plains is to sit tight and see if those new projects can boost cash flow as much as management claims they will.