Please ensure Javascript is enabled for purposes of website accessibility
Log In Help Join The Motley Fool
Free Article Join Over 1 Million Premium Members And Get More In-Depth Stock Guidance and Research
By Keith Speights - Dec 10, 2015 at 9:02AM

The embattled biotech faces touch challenges. Are they too tough to overcome?

Is the dreamboat envisioned by MannKind Corp. (MNKD 0.93%) turning into something more akin to the Titanic? I've been a proponent of the biotech for quite a while, but it's hard to remain positive about MannKind in light of the massive weight of problems the company faces. Some investors are probably now asking a tough question: Is MannKind in a death spiral? Here are three factors that make it possible the answer is "yes." 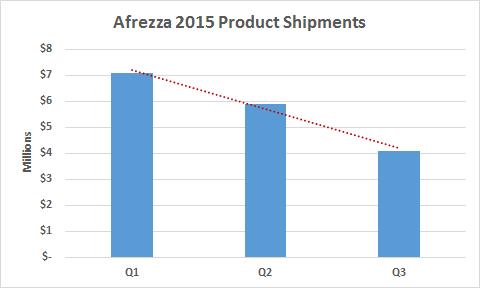 It would be one thing if Afrezza sales were climbing more slowly than expected. Instead, product shipments are sinking like a lead balloon. The trend ain't a friend for MannKind or Sanofi.

The biggest issue behind the troubling picture is reimbursement. Too many payers still don't have Afrezza on their formularies. And many insurers that do pay for Afrezza mandate prior authorization before a patient can use the drug.

Is good news on the way? Probably not soon. Sanofi lowered guidance for its diabetes products and specifically pointed to lower-than-expected market penetration for Afrezza and Lyxumia. MannKind executives have mentioned anecdotal evidence that Sanofi's direct-to-consumer marketing campaign has generated patient enthusiasm that could lead to higher sales. That's what they said in the second quarter, too, though -- yet Afrezza shipments continued to fall.

2. Cash is burning
Even if we assume that Sanofi's efforts to woo payers and patients will ultimately pay off, the clock is ticking for MannKind. The biotech is burning through cash at a rate of over $10 million per month. As of the end of September, MannKind had cash and cash equivalents totaling just under $33 million. It doesn't take a math whiz to see the problem.

MannKind did manage to pull off a neat financing trick by listing on the Tel Aviv Stock Exchange. The maneuver resulted in an additional $36.2 million coming in, net of associated fees. MannKind also can access another $30 million through a loan agreement with The Mann Group and receive up to $38 million through its at-the-market equity distribution program.

Putting all of this together means that the biotech should be able to stretch out its cash for maybe another 12 months or so. Something will have to happen prior to then, though.

MannKind could issue more shares, but the company is reluctant to dilute even more -- especially with a short interest of 47%. There's also the option of borrowing more money from billionaire founder Al Mann yet again. If the outlook for Afrezza doesn't improve, however, you have to wonder if even that well could run dry.

3. Questions are swirling
Speaking of Al Mann, that leads to another huge question for MannKind: Who's going to run the company? Mann was named interim CEO recently after Hakan Edstrom left the company. I think it's fair to say that Al Mann is the only 90-year-old running a publicly traded biotech.

It has also not escaped investors' notice that Sanofi could bail out of the partnership to market Afrezza. The French drugmaker retains the option to terminate the relationship by notifying MannKind as early as January. I doubt that will happen anytime soon -- but the mere fact that it's even a possibility at this point is troubling.

Death spiral?
Declining sales, depleting cash, and departure of a CEO. Is MannKind in a death spiral? Despite the abysmal news, I don't think the biotech's fate is sealed yet.

For one thing, I suspect that some payers could open up reimbursement in 2016. Afrezza does, after all, have a lot going for it with its rapid absorption into the body and convenience factor. It's also quite possible that direct-to-consumer marketing helps build word of mouth among diabetic patients. And MannKind just might find another company interested in using its Technosphere platform, the delivery mechanism for Afrezza, for other drugs.

I think that as long as Al Mann believes Afrezza has a chance at success, he'll provide the cash to keep MannKind going. His conviction could also be helpful in finding a new CEO.

Don't get me wrong. I'm not upbeat about MannKind's future. There are simply too many hurdles to overcome. However, I think the biotech at least has a shot at turning the corner. I've always liked underdogs. And MannKind definitely remains an underdog for now.