For many years, Apple (NASDAQ:AAPL) has adopted what many call a "tick-tock" methodology (obviously borrowing the phrase from a certain large chipmaker) for its iPhone lineup. In even-numbered years, the company will introduce an iPhone with a new number, such as the iPhone 5 and 6; in odd-numbered years, the company takes the same basic phone design as in the previous year but adds a whole lot of goodness under the hood.

Although this development process has generally worked well for the iDevice maker, I believe it is now outdated. Indeed, in this article, I plan to show it's time for Apple to shift to a release cadence in which the company releases totally new phones each and every year.

Why this has historically made sense

Traditionally, many buyers -- particularly those in the United States -- would buy smartphones on two-year carrier contracts, effectively meaning users would upgrade their devices every two years.

With such plans being commonplace, it made perfect sense for Apple to introduce a new phone and then an upgraded "s" model. Whether a user was on the "new number" cycle or the "s" cycle didn't matter; these buyers would have two years' worth of improvements to look forward to.

And in the early innings of the smartphone boom, two years' worth of innovation was a huge deal.

The concept is outdated today, though
According to market research firm IDC, worldwide smartphone growth is cooling off, with worldwide industry growth expected to slow to just 9.8% in 2015. IDC also expects the five-year compounded annual growth rate for the smartphone market at large will come in at just 7.4% in the 2015 to 2019 period.

IDC says smartphone sales in mature markets (such as the United States) will be driven principally by "replacement purchases and second devices." To this end, the firm thinks smartphone makers will "push device financing and trade-in options" such as Apple's recently announced "iPhone Upgrade Program" to try to quicken device upgrade cycles.

If Apple is serious about trying to get people to upgrade every year (rather than every two years), then I would expect the company to ax its current "tick-tock" development methodology and instead release fundamentally new phones each year.

What will it mean for Apple from a financial perspective?
Apple has grown its revenue significantly over the last several years, which has allowed it to dramatically ramp up its research and development spending from where it was early on during the smartphone boom: 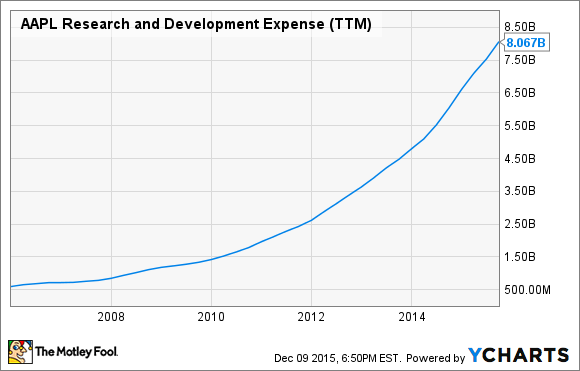 This dramatically increased spending means Apple has the resources to be more aggressive in producing new designs and implementing new features each year. I suspect Apple already realizes it needs to make bigger jumps with each iPhone release than it has previously, so I don't believe the company needs to further increase research and development spending to support this.

The only area where I could see Apple taking somewhat of a hit is on the gross profit margin front as the company will be able to reuse fewer components from the prior-generation models (most components tend to decline in price year over year).

With that in mind, it's worth noting with the iPhone 6s, Apple upgraded just about every single component in the latest iPhones over the prior generation models, with perhaps the LCD panel being the only major, noticeable component that stayed the same year over year.

Despite this, Apple guided to gross profit margins for its fiscal first quarter that should be about flat with those seen a year earlier; Apple may very well be able to transition to full redesigns each year without taking too much of a hit (if any) on the gross profit margin side of things.