Helped by a boon in real estate sales, Buffett's real estate empire should post profits higher than the pre-financial-crisis peak. 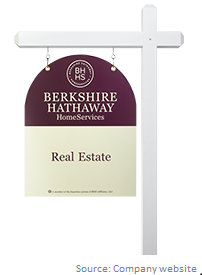 Some estimates suggest there is $27.5 trillion of residential real estate in the United States. Trillions of dollars of real estate changes hands each year, enriching everyone involved, from banks to real estate brokers.

You've probably seen a for-sale sign bearing a familiar name in a neighborhood near yours. And yes, this is Warren Buffett's Berkshire Hathaway (BRK.A 1.62%) (BRK.B 1.47%) -- at least a small portion of it, anyway.

When Berkshire Hathaway bought MidAmerican Energy in 2000, it came with a little freebie: a small army of real estate agents who worked for a brand then known as HomeServices of America.

Buffett wrote in one of his letters that he was more interested in the energy assets. The real estate business came along for the ride.

As incidental as its original purchase may have been, its subsequent growth has been anything but. It acquired 67% of the Prudential and Real Living franchise operations in 2012, and Buffett described the model in his letter to shareholders, noting that the two brands "license 544 brokerage companies throughout the country and receive a small royalty on their sales." Berkshire Hathaway also received an option to buy the remaining operations within five years.

It didn't stop there. It's recently acquired brokerages all over the United States, often acquiring top brokers in cities where it can enter with an immediate book of business. The HomeServices website now lists 32 brands under its umbrella.

The financial results are telling, even if disclosure is relatively light. This year, the brokerage business should generate revenue of about $2.6 billion, based on my estimates, up from $2.16 billion in 2014. Earnings before interest and taxes (EBIT) should also rise above the pre-crisis high set in 2005. 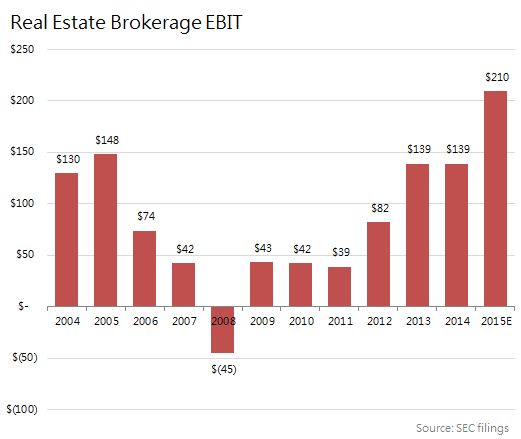 But as is often the case with Buffett's favorite companies, accounting results understate the true earnings power of the business. Publicly traded rival RE/MAX Holdings (RMAX 0.04%) discloses in its filings that it amortizes franchise agreements over 12 years. One would expect that Berkshire would account for acquired franchise agreements and intangible assets on similar terms, resulting in a non-cash charge against earnings for years after an acquisition takes place.

RE/MAX Holdings' results for the first nine months of 2015 reveal an EBITDA margin of 51.4%, compared with an EBIT margin of 42.9%, the difference due mostly to the depreciation of franchise agreements. Berkshire's acquisitions resulted in an EBIT margin of just 6.4% for its brokerages in 2014.

It's an interesting case in the Berkshire Hathaway portfolio, representing the first time in which Buffett has used the Berkshire name to drum up business. Sure, its reinsurance and energy companies carry the name of their parent, but the former was to indicate the strength of the reinsurers' balance sheet, and the latter was done perhaps to win price increases from regulators.

Berkshire Hathaway HomeServices is named to win the trust of individuals -- everyday people who want to buy or sell a home.

So far, the Berkshire brand appears to be carrying its weight. More and more agents are working for the company, it's playing a part in more transaction volume, and the business is generating more revenue and earnings than ever before -- even if some of the growth is from acquisitions and not purely organic.

Of course, Buffett won't leave you hanging if you buy or sell your home with one of his agents. Berkshire would love to sell you some Benjamin Moore paints for your walls, Shaw Industries carpet for every room, and a lovely Larson Juhl frame for the family photo, too.