There's no doubt that the current oil market is a challenge for producers of all sizes. That being said, larger companies like ConocoPhillips (NYSE:COP) do have a big competitive advantage in dealing with these downturns because its diversification gives it many more options. That optionality was on full display when the company released its 2016 operating plan and capital budget earlier this week.

Due to the continued challenges facing the oil market, ConocoPhillips needed to take additional action, so it is reducing its capital expenditures budget significantly. The company plans to spend $7.7 billion in 2016, which is 25% less than it spent this year and 55% less than it spent in 2014. However, due to the structure of its portfolio and the projects it has ramping up, the company still expects its production next year to rise between 1% and 3%, after adjusting for asset sales already in progress.

What's pretty remarkable about this budget is that it stands below the $8 billion level that ConocoPhillips thought it would need to spend just to hold its production flat. That said, there is a bit of a catch, which is the fact that the company is benefiting from investments made in prior years that are finally starting to pay dividends via production growth in 2016. The biggest of which are the company's Surmont 2 oil sands project and its APLNG project in Australia, which both delivered first production this year, but are still ramping up toward peak levels.

The benefits of being diversified
Because of ConocoPhillips' diversification, both geographically and by asset type, it has a lot of options at its disposal to continue delivering a compelling value proposition to shareholders. The following slide details where the company plans to invest its money and how that will deliver value for investors. 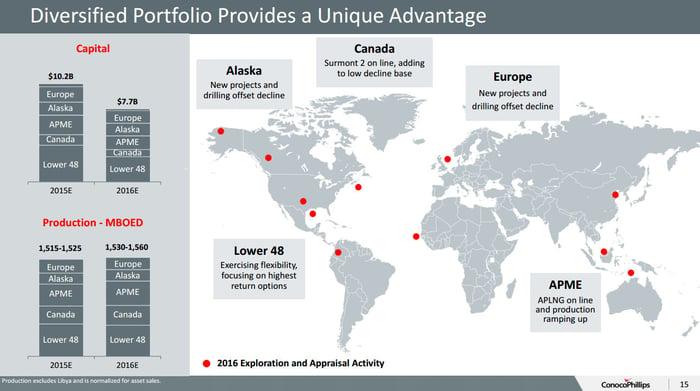 The chart in the upper left-hand corner shows the percentage of the company's capital budget that's earmarked for each of its geographies both in 2015 and in 2016. The largest bucket of spending continues to be devoted to the lower 48 states, which is primarily being used to develop unconventional shale plays such as the Eagle Ford and Bakken. While these were once major growth drivers for the company, it has scaled back and instead is drilling for returns instead of growth. In fact, ConocoPhillips actually expects its lower 48 production to decline because it's not drilling enough wells to maintain its production right now.

The rest of its budget is split fairly evenly between Alaska, Canada, Europe, and the Asia-Pacific/Middle East Region. The bulk of the spending in these regions is going toward drilling projects that keep production from declining, and therefore its cash flow relatively stable, while at the same time production in Canada and APME will grow due to the aforementioned major project ramp-ups.

This dual diversification is really the key difference between ConocoPhillips and a lot of smaller independent oil and gas producers. It has the luxury to pull back spending in North American unconventionals, for example, and let its production decline because of the embedded ability of its portfolio to make up that loss elsewhere. It's a luxury that a company such as Whiting Petroleum (NYSE:WLL) doesn't have because the bulk of its portfolio is in high declining unconventional production, which requires a lot of capital spending just to maintain. Because of this Whiting Petroleum's only option is to invest back into its unconventional production, which will take every penny of projected cash flow just to maintain next year. This lack of long-term, low-decline production from projects outside the U.S. really limit Whiting Petroleum's options during the downturn. Meanwhile, ConocoPhillips' diversification means it can still grow its production, which is throwing off enough cash flow to enable the company to continue paying a generous dividend to its shareholders.

Investor takeaway
ConocoPhillips is ready for whatever 2016 may bring because of one big competitive advantage: diversification. Unlike shale-focused rival Whiting Petroleum, ConocoPhillips' investments in long-term, low-decline assets around the world mean that it has options at a time those are sorely needed. This is really what is giving it the flexibility to shift its investments to where it can capture the best value over both the short and long term.