What's most surprising about these two names that doubled during 2015 is that they are not small companies -- far from it, actually.

Overall, 2015 hasn't been a great year for stocks so far. The S&P 500, which is made up of 500 large companies traded on the NYSE or NASDAQ, is down about 1% for the year at the time of writing. But some stocks "escaped" from the stock market's underperformance this year. Indeed, these companies didn't just outperform the S&P 500 during 2015 -- they absolutely crushed it. 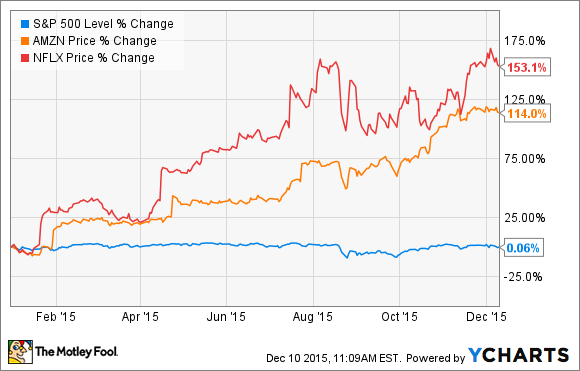 For 2015, one of the most compelling moments representative of Amazon's continued success was when around midyear, the e-commerce giant's market capitalization exceeded Wal-Mart's. And as Amazon soared throughout 2015 as Wal-Mart underwent a sell-off, Amazon's lead over Wal-Mart, measured by market cap, continued to increase. 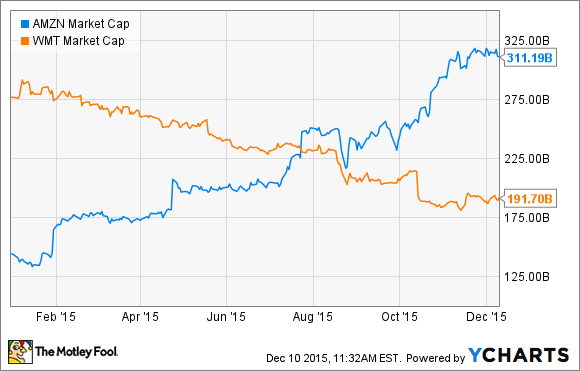 Investors may be seeing the beginning of a new period for Amazon -- a period where the company has scaled meaningfully enough that profitability could swell even as the company spends aggressively to expand its business.

Netflix's rise in 2015 has been nothing short of astounding. The company's market cap soared from around $20 billion to around $54 billion at the time of writing.

A key concern among investors in both companies is their inability to report consistent and meaningful profits. But a failure to grow profits in the near term doesn't reflect the fact Netflix, like Amazon, has been aggressively expanding its business to support fatter profits in the future. As fellow Fool Adam Levine-Weinberg explained in a recent look at the company's valuation, "Netflix's profitability is currently being held back by its heavy investments in new international markets. This sets it up for a big jump in earnings over the next few years."

These two stocks' excellent performances during 2015 provide a few lessons. Here are two:

And a final but important note: Investors should keep in mind that a single year's market outperformance doesn't automatically mean the underlying businesses deserved the bullish moves of their stocks. Further, the unfortunate consequence of huge climbs during such a short period is that the valuations for these companies are probably not as attractive as they were a year ago -- even if the prospects for business growth have improved.

Daniel Sparks has no position in any stocks mentioned. The Motley Fool owns shares of and recommends Amazon.com and Netflix. We Fools may not all hold the same opinions, but we all believe that considering a diverse range of insights makes us better investors. The Motley Fool has a disclosure policy.

Is This Cruise Stock Due for Major Growth Ahead?