There's no doubt that the industrial automation sector has had a disappointing 2015. Falling oil prices have pressured capital spending in the upstream oil industry, and slowing industrial growth -- not least in emerging markets -- created caution in industrial capital spending. That said, Rockwell Automation (NYSE:ROK) has notably outperformed peers such as Emerson Electric (NYSE:EMR) and ABB Ltd. (NYSE:ABB). Let's look at why, and examine whether Rockwell's stock can outperform in 2016. 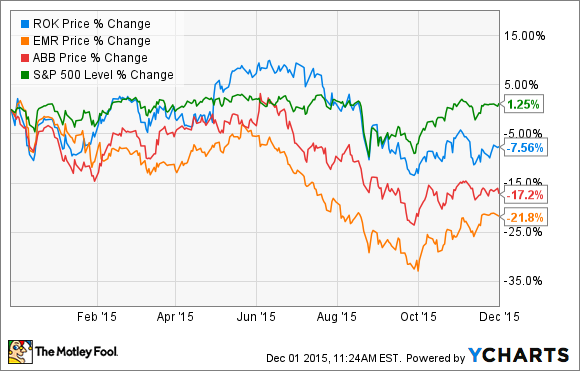 Earnings comparison
All three companies have lowered earnings and sales expectations as the year has progressed, so it's not as if Rockwell has managed to particularly outperform on that front. For example, Emerson Electric started its fiscal year (which ends in September) predicting underlying sales growth of 4% to 5%, only to finish its year with a 2% decline in underlying sales. Meanwhile, in ABB's third-quarter results, given in October, the company lowered its 2015-2020 annual revenue growth target to a range of 3% to 6%, from a range of 4% to 7% previously, and reported a whopping 12% decline in like-for-like orders.

Conditions were hardly much better at Rockwell. The company's fiscal year ends in September, and its full-year organic sales growth of 1.1% was significantly below its target of 2.5% to 6.5% given at the start of its year. Moreover, Rockwell's full-year 2016 outlook saw CEO Keith Nosbusch forecasting flat to negative 4% sales growth and citing customer caution with "capital expenditures and operating spending."

In fact, as a pure-play industrial automation business, Rockwell is arguably more exposed to headwinds from the industrial sector. Emerson also sells network power solutions, climate technology, and commercial and residential solutions, while ABB also sells into the utility and transportation markets.

Indeed, a look at valuation suggests Rockwell's valuation premium has increased over its peers'. I'm using enterprise value (market cap plus net debt) compared to earnings before interest, tax, depreciation, and amortization, because it's a more useful way to compare companies with different debt levels. 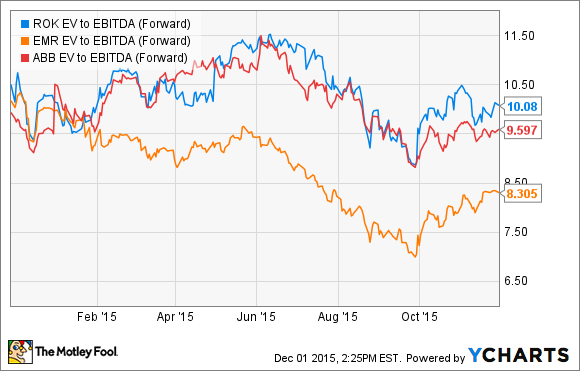 So why does Rockwell trade at a traditional premium?

IIOT simply refers to what Rockwell calls the "Connected Enterprise," whereby industrial equipment is married with monitoring and controlling software -- usually with Internet-enabled devices. IIOT is relevant in the solutions provided to customers -- think of sensors on a General Electric turbine that monitor performance -- and also within the manufacturing operations of an industrial company itself. This is where Rockwell comes in.

Rockwell's sensors, controls, and software architecture help companies integrate hardware with software while collecting data that can enhance productivity -- a key benefit in a slow-growing economy where manufacturers are finding revenue growth hard to achieve.

All of this only increases the potential for Rockwell to be a takeover target. For example, Rockwell could increase ABB's presence in the U.S. and be complementary to Emerson's more hardware-heavy industrial automation solutions. Moreover, GE is refocusing on its industrial business, with its Industrial Internet being a key focus, and a deal for Rockwell has previously been discussed in the analyst community. Honeywell is also on the acquisition trail, and the company has also been mentioned as a potential suitor.

Can Rockwell continue to outperform its peers?
Rockwell is as exposed as its peers to capital spending trends in the near term, but it obviously has long-term secular growth prospects. Moreover, even if the industrial economy deteriorates in the next few years, then companies will come under pressure to boost top-line growth through acquisitions. 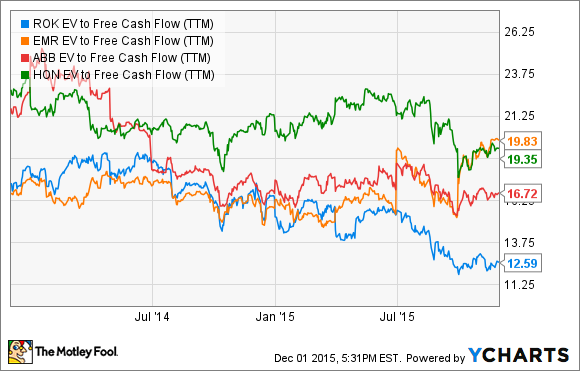 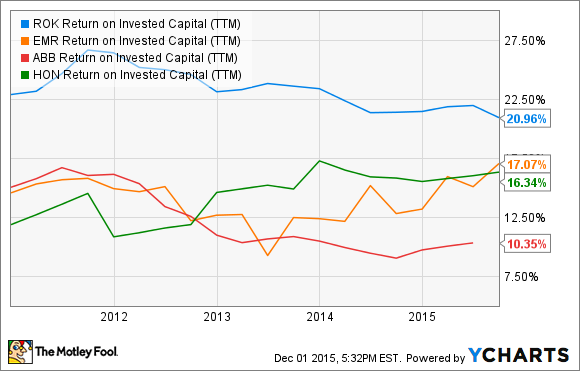 In other words, an acquirer is likely to boost free cash flow generation and increase its ROIC, and that's without factoring in any synergies from cost savings or cross-selling. A combination of long-term IIOT prospects and takeover potential are underpinning the stock's valuation, and in my view are likely to do so in 2016 as well.