Even before the recent announcement that Kinder Morgan (NYSE:KMI) cut its dividend by 75%, I have seen numerous articles claim the very concept of a master limited partnership is flawed. They point to things like the way MLPs do their accounting, and the fact that they use "voodoo" financial terms like "distributable cash flow" as the reasons MLPs are destined for failure in the long run.

I'm certain that now that Kinder Morgan -- one of the largest and possibly most visible name in the oil and gas midstream space -- has cut its dividend, there will be a huge influx of articles written along those lines. (Yes, I know Kinder Morgan is a C-Corp and not an MLP, but its modus operandi and reported accounting are very close to those of an MLP.)

As much as you may hear cries from others that the master limited partnership model is flawed, it's wrong. It's not the MLP model that's the problem, it's the way they have been managed and the expectations put on them by investors like us and Wall Street.

Your business model does what?
Suppose someone came to you with a great investment idea. This person had a business model that would churn out steady cash flows over long periods of time with few expenses and continuing capital obligations. To grow, though, it needed to put a lot of capital up front to get new projects off the ground.

It sounds pretty good so far, but you ask the following question: "How do you plan to fund those new projects?"

The response: "We can fund some of it with debt, but then the other part, we're going to tap this market that has millions of players. Our currency in this market is bought and sold at a frantic pace, and the potential buyers of that currency will tuck tail and run at the slightest whiff of trouble when we will probably need them most."

Just to make sure you're hearing this right, you then ask, "Well, then why not keep some of that cash you generate to fund future growth?"

The response: "Oh no, we want to take all of that cash we don't need to maintain our current operations and give it back to those same people who will run out on us when we need them."

This sounds absolutely absurd, right? Well, this is the value proposition many master limited partnerships have sold investors. They build new pipelines and other MLP qualifying income sources, use debt and equity issuances to finance them, and then give back almost all of its distributable cash flow each quarter through generous distributions.

For the most part, we haven't questioned this logic because so many companies in the MLP space operated this way. With the boom in North American oil and gas production, it was so easy to look the other way as companies issued gobs of new shares to fund these new projects that were touted to be immediately cash flow accretive and would boost distribution payments. Yet there was so little discussion about keeping some of that cash around to fund the next project.

It's their fault...
Nowhere in the master limited partnership structure does it say that a company has to pay investors as much of its cash flow as possible. It doesn't say anywhere that we as investors have to agree that issuing equity is an acceptable method of raising capital for master limited partnerships. Instead, these were the things management teams at MLPs sold us.

They wanted to lure us in with generous distribution payments and gaudy distribution growth plans. They assured us that using equity to fund new growth was an acceptable method of raising capital that wouldn't impact the sustainability of its distribution. They told us that generating 5% to 10% more cash than what they payed out each quarter would ensure the safety of these payments.

For some reason, we have bought this siren song, chasing after MLPs with large payouts and promises of distribution growth that put dollar signs in our eyes. We sat in the passenger seat while management drove at ever faster rates, justifying their speed by saying everyone else around them was traveling just as fast.

It's our fault...
It's easy to point to management teams and say it's their fault they didn't use some more prudence in their capital allocation. Why weren't they more conservative? The truth is, we pushed them to do it.

I was in communication with an executive at a master limited partnership recently, and I asked why his company paid out a fixed distribution the way it did. After all, no matter how much a company tries to insulate itself from market factors like commodity prices, there is still some exposure. Why not give yourself some wiggle room by consciously saying the payment to investors will fluctuate a little bit, and retaining a little bit of cash for a rainy day?

He responded by saying if he had it his way, the company would pay a much smaller guaranteed distribution. A modest floor that investors can expect no matter what. From there, they would then pay out a set percentage of the remaining cash flow, something like 75% of what was left over.

It sounded like a great idea, so I asked why they didn't do it.

"It's plain and simple," he said (I'm paraphrasing), "We would get killed in the equity markets. If you look at companies in our space, those MLPs that have a variable rate distribution trade at much, much lower multiples than those with fixed rates set by management. Those fixed rates can be completely unsustainable and destined for a cut in the future, but they still get a better valuation than those that pay a varying rate. If you ever needed to raise equity, which one would you choose?"

Think about that for a second. Companies in situations like this are forced into making decisions like this because investors and Wall Street analysts command them to.

If that wasn't enough evidence, consider Targa Resources Corp. (NYSE:TRGP). The company recently announced that it planned to buy its limited partnership Targa Resource Partners, citing that bringing both entities together would help lower the cost of new capital and gain some tax benefits. Essentially, this deal would help ensure a more sustainable future for the company and longer-term investors.

One of the largest critiques of the deal from Wall Street, though, is that Targa Resources Corp is giving up its incentive distribution rights over the partnership -- a management fee, if you will. By doing so, it would drastically slow its dividend growth rates.

Since that deal was announced a little less than a month ago -- a deal that is in the best interest of the company for the long term -- shares of the parent company are down more than 30%.

This isn't an isolated case, either. Kinder Morgan is cutting its dividend as a means to deploy some of its internally generated cash flow for new growth opportunities. This is a decision that helps the long-term viability of the company, and shares still declined more than 7% during after-hours trading immediately following the announcement.

We aren't innocent bystanders in that speeding car; we are the ones shouting at the drivers to speed up.

It doesn't have to be this way
One response you might get is that this is the way it is, and there is no way to change it, so you can either buy into it, or get out. But just because the space is wrought with companies tempting fate doesn't mean you need to throw the baby out with the bath water. Here are a few companies in this space that prove it.

Take a look at this chart of average shares outstanding for seven different companies over the past five years. 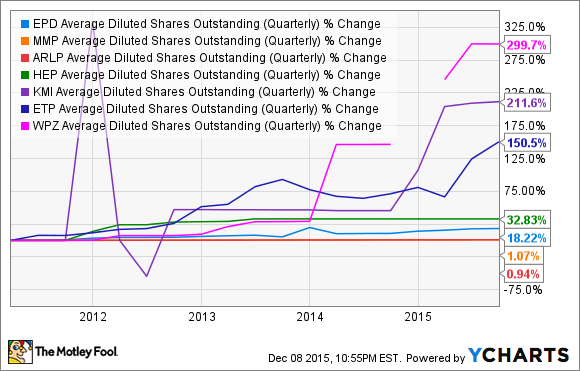 There is a pretty large bifurcation, here. Four companies -- Enterprise Products Partners (NYSE:EPD), Alliance Resource Partners (NASDAQ:ARLP), Holly Energy Partners (NYSE:HEP), and Magellan Midstream Partners (NYSE:MMP) -- each have only modestly issued shares. At the same time, the others -- Kinder Morgan, Energy Transfer Partners, and Williams Partners -- have all more than doubled their share counts over the same time period to fund development projects.

It's also no coincidence that the four companies that have not relied on equity issuances also happen to have payout policies that retain cash flow for growth.

It also goes to show that the structure of the master limited partnership is not a broken or flawed one. When a management team doesn't give into market pressure to raise distributions at breakneck pace, instead maintaining a more conservative approach, it can indeed be sustained over the long term. Furthermore, owning these kinds of master limited partnership can be a very lucrative investment. 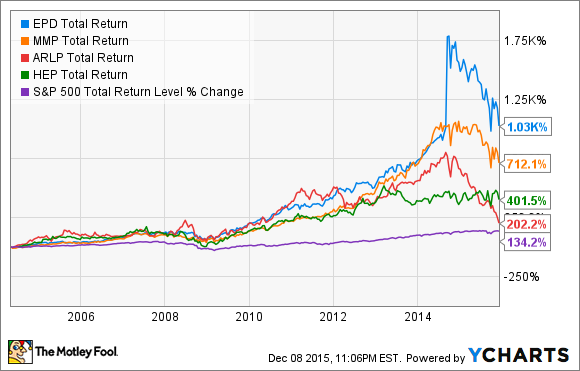 What a Fool believes
We're all a little to blame for what has happened with what should be one of the most stable and conservative segments of the energy sector. Our desire to chase those high growth rates that management sold us on led us down an unsustainable path. I know I was certainly guilty of getting starry-eyed at some master limited partnerships.

But it doesn't have to continue this way. As investors, we have choices in our investments. When making your investment decisions in this space, look for companies that have elected to eschew the all-too-common model of paying out investors all of their available cash and instead retain capital for future growth. In doing so, we can reward those companies that have elected this management practice and hopefully force others into more conservative behavior.