There has been plenty of chatter over the last year about a bubble in fast-casual restaurant stocks.

The success of companies like Chipotle Mexican Grill (NYSE:CMG) and Panera Bread encouraged a raft of industry challengers to following them into the public markets, and investors have chased after them, pumping those IPO's up to multi-billion dollar market caps and triple-digit P/E valuations, or the kind of price tag normally reserved for not-yet-profitable but disruptive ideas coming out of the tech sector.

Among those companies to go public in the past few years have been Noodles & Company (NASDAQ:NDLS), Potbelly, El Pollo Loco, Shake Shack, Habit Restaurants, Zoe's Kitchen, and Wingstop.

But now one of hottest fast-casual restaurant chains has pulled out of its anticipated IPO, indicating that the bubble in the sector may have popped. After a months of a buildup to a public offering, Jimmy John's announced it would remain private. Founder and majority owner Jimmy John Liautaud insisted he realized he wouldn't be comfortable in a Wall Street environment,  but Liautaud may have seen the follies of some of his restaurant peers and backed out of the arrangement.

Jimmy John's was no small prize in the fast-casual space, either. The company now has 2,300 locations across the country, and added 307 last year, more than all other restaurant chains except Starbucks, Dunkin' Donuts, and Subway. The IPO was expected to value the company at around $2 billion.

When the bubble bursts
Jimmy John's management said the IPO market did not affect its decision, but the rise and crash of restaurant stocks has nonetheless been very real. Of the seven recent IPOs listed above, all but Zoe's Kitchen now trades down more than 40% from their all-time high. Four of the seven or down more than 50%, and Potbelly, El Pollo Loco, and Noodles & Company have all fallen more than 60% from their post-IPO peaks. As you can see from the chart below, there's been a clear downward trend. 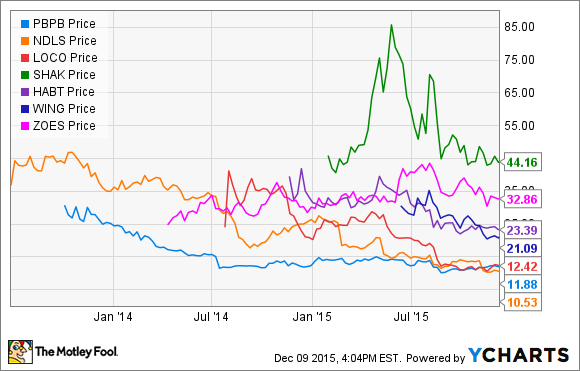 A closer look at the poor-performing trio could shed some light on the bubble effects in the sector.

Noodles & Company has the worst record of the bunch as its shares are now off close to 80% from its post-IPO peak. Noodles was priced at just $18 in the IPO, but like many of recent debuts, it spiked on opening day to $39 and eventually reached an intraday high of $51 before falling to just above $10 today.

The euphoria behind Noodles may have been understandable at the time. It was an early entrant in the rush of restaurant IPOs, debuting in 2013, and the market was hungry for the next Chipotle, a stock that has returned more than 1,000% since its 2006 IPO. At that time, Noodles had 343 restaurants and planned to expand to 2,500 in the next 15-20 years. The company's CEO, Kevin Reddy, is even a Chipotle alum, having served as the burrito roller's COO during its pre-IPO expansion phase.

Fast-forward to today and Noodles' projection looks troubled. In its most recent quarter, comparable sales declined, its restaurant-level operating margin contracted by 320 basis points, and it only broke even on the bottom line. Despite continuing to expand -- having grown to 488 stores -- the company also said it would close 16 underperforming locations in the fourth quarter, a sign that its growth strategy is not panning out.

Not enough mouths to feed
Noodles' woes are a sign that the food concept matters. It's not enough to have a fast-casual brand and pedigreed management; people have to want your product. Pasta dishes are an unproven concept in the fast-food space, and there just doesn't seem to be the same level of demand for it as, say, burgers or sandwiches.

Noodles is not the only fast-casual chain with aspirations of growing from a few hundred stores to a few thousand, and there simply isn't enough room in the market for all of them. Though spending at restaurants and bars is up 8% this year, the market for eating out is relatively fixed. It's not like the market for smartphones, for example, where adoption and  the bottom line can suddenly explode, and it doesn't deserve to be valued as such.

McDonald's comeback also seems to confirm the fast-casual bubble. If this sector were to succeed across the board, it would have to do so by taking share from the traditional fast-food giants, but that has not been happening as McDonald's, Burger King and Wendy's have all posted recent gains.

The restaurant stocks that have faltered have done so because the market ignored that reality. There will be some winners, but there isn't enough demand for each brand to expand 10 times over. The ones, like Noodles, that aren't profitable years into their IPO are likely to stay that way.