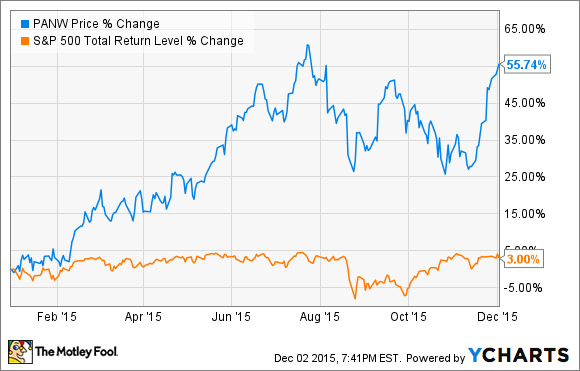 So what: Specifically, revenue in Palo Alto's latest quarter rose an impressive 54.6% year over year to $297.2 million, driven by strong growth in new customers and expanded relationships with existing clients. That growth was also nicely distributed between segments, as product sales rose 45.5% increase in product sales to $147.7 million, and services revenue climbed 64.6% to $149.5 million. Palo Alto's bottom line was even more impressive, with adjusted net income more than doubling from the same year-ago period to $31.6 million, or $0.35 per share.

Meanwhile, cash flow from operations nearly doubled over the same period to $146.7 million, while free cash flow rose 84.3% to $127.2 million. And looking forward, Palo Alto's billings climbed 61.3% to $388 million -- good for its highest billings growth rate since going public in 2012.

Now what: To be fair, Palo Alto has made a habit of underpromising and overdelivering. Guidance for fiscal Q1, for example called for lower revenue of $280 million to $284 million, and earnings per share of $0.31 to $0.32. Investors should also remember the company still isn't profitable based on generally accepted accounting principles as it invests to capture growth and market share in these early stages; its GAAP net loss came in at $38.7 million, or $0.45 per share.

At the same time, Palo Alto's "light" guidance each quarter is no longer technically fooling the market. For its current quarter, Palo Alto sees revenue of $314 million to $318 million, and adjusted earnings per share of $0.38 to $0.39. Analysts, on average, have already ratcheted up their expectations in advance, with consensus estimates calling for revenue and earnings at the high end of both ranges.

If one thing is clear, however, it's that Palo Alto's products and services continue to resonate with its customers, and growth shows no signs of slowing in the near future. As long as Palo Alto continues to deliver these kinds of impressive results as it inches toward sustained profitability, I see no reason the stock won't also continue to reward investors with outsized returns.