What: Shares of Yelp (NYSE:YELP) rose 35.4% in November, according to S&P Capital IQ data, on the heels of the company's strong quarterly report on Oct. 28, 2015. Even so, Yelp stock still has a long way to go before it fully recoups its year-to-date losses: 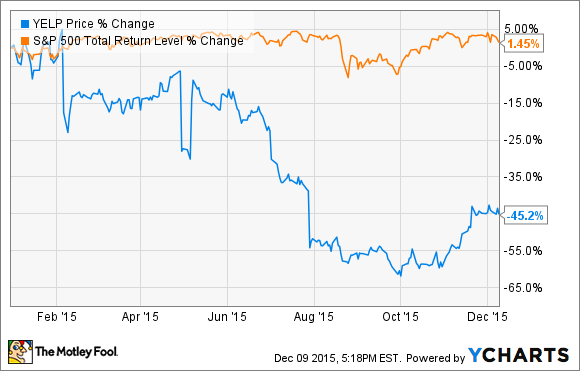 So what: In fact, Yelp's past failure to put together all the pieces of a decent quarter -- on the surface, at least, by not only exceeding expectations on revenue and earnings, but also issuing encouraging guidance -- left me worried ahead of the report that the local business review specialist's latest quarterly announcement might once again disappoint the market. Thankfully, Yelp managed to deliver an all-around solid report, including a surprise adjusted profit of $0.03 per share when analysts were predicting a net loss of $0.09 per share.

Management credited Yelp's outperformance on the continued strength of its mobile app, which the company later confirmed has grown to represent around 71% of all searches across Yelp's ecosystem. Meanwhile, monthly unique visitors on mobile increased 22% year over year last quarter, more than offsetting a 2% decline in desktop users to $79 million. And local advertising revenue rose a solid 36% year over year to $115.9 million.

Now what: It's no mystery Yelp stands to benefit from consumers' shifting shopping habits, especially as mobile Internet connectivity becomes more ubiquitous. But in the coming quarter, investors would also be wise to keep a close eye on Yelp's ability to continue monetizing its growing base of mobile users as it works to achieve sustained profitability. If Yelp can prove these recent positive trends will carry forward, I won't be the least bit surprised if Yelp stock continues climbing from here.