Please ensure Javascript is enabled for purposes of website accessibility
Log In Help Join The Motley Fool
Free Article
Join Nearly 1 Million Premium Members And Get More In-Depth Stock Guidance and Research
By Daniel B. Kline – Dec 13, 2015 at 8:05AM

The idea of self-driving cars tends to bring out strong emotions in people.

Some are terrified at the idea of giving up control. Perhaps it's a fear of crashing, or maybe it's just the idea that you're putting your fate in the hands of a computer-controlled machine.

In some cases, the idea of giving up the wheel is dismissed because the person simply enjoys driving. For those folks, it's not about having the time to read, study, or nap while heading to their destination; it's about the joy of having a vehicle under their command.

For the remaining drivers, however, the idea of jumping in the back seat, typing in a destination, and letting the car do the work has immeasurable appeal. It's for that audience that Alphabet (GOOG 1.96%) (GOOGL 1.96%), Apple (AAPL 0.90%), and perhaps some other companies are working on creating self-driving vehicles.

And while the introduction of such technology may still be years away (and Apple won't even publicly admit it's working on it), new research from the World Economic Forum (WEF) suggests that when it happens, demand will be there.

What does the survey say?
While the numbers vary greatly by country, the survey from WEF, which was done in conjunction with the Boston Consulting Group, showed that 58% of global respondents were willing to at least try a driverless car. In the United States, 27% were "very likely" to try one, while another 25% considered themselves "likely."

In developing nations the numbers were even higher, with 85% of people in India and 75% in China saying they were very likely or likely to try one.

The research also showed that a decent amount of people were willing to pay more for a vehicle that drives itself. In the U.S., 38% agreed they would be willing to shell out extra money for a driverless car, and 57% of those people agreed that they would pay up to $5,000 more. 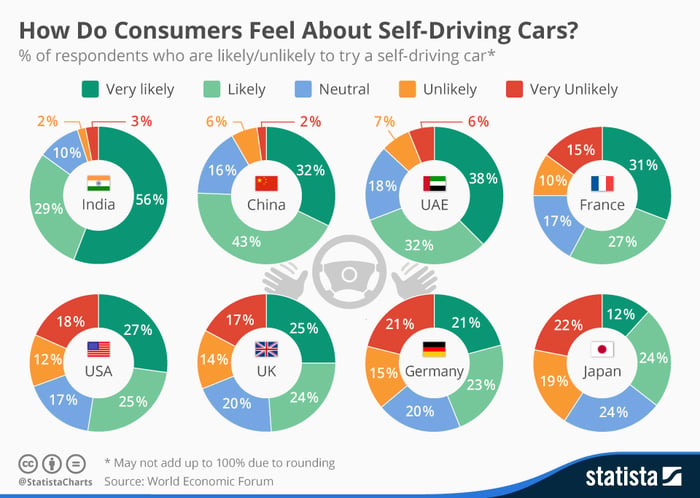 A lot of hurdles remain
Despite the relatively high number of people around the world willing to try self-driving vehicles, only 35% of those surveyed said they would let their children be driven alone in one. That suggests that despite a consumer openness to the idea, skepticism remains.

WEF found that most believed that consumer acceptance would be the biggest roadblock facing driverless cars at 56%, with technology following right behind at 44%.

Despite any potential problems, many in the auto industry believe the opportunity is simply too tempting for companies to not pursue.

"Everyone sees it as an opportunity to expand their business model," Bobby Hambrick, CEO of AutonomouStuff, a company that sources autonomous computing parts to the auto industry, told Re/code. "Autonomous driving in general is very disruptive for the automotive business model. ... They're all in a race."

It's going to happen
Alphabet hasn't been shy about its efforts to make driverless vehicles happen. Apple has been more subtle, operating under a veil of secrecy, but whether it's one company leading the way or multiple brands in the space, self-driving cars seem inevitable as long as the companies making them can prove that they are safe.

It's unlikely that a massive shift toward self-driving vehicles will happen anytime soon, but a slow shift could begin with limited implementation. It appears, based on this survey, that the public will accept that, give this technology a chance, and maybe even give up the steering wheel in the long term.

Daniel Kline owns shares of Apple. He would love a self-driving car and a sentient coffeemaker. The Motley Fool owns shares of and recommends Alphabet (A and C shares), and Apple. We Fools may not all hold the same opinions, but we all believe that considering a diverse range of insights makes us better investors. The Motley Fool has a disclosure policy.