Is Amazon.com (NASDAQ:AMZN) preparing to take on the package delivery giants, as rumor suggests? And if so, what sort of upheaval would that create in the industry?

A lump of coal
It's no secret that since the retail debacle of Christmas 2013, where customers who purchased items well in advance of the drop-dead deadline to get packages delivered by the holiday still hadn't received them weeks afterwards, Amazon's top priority became assuming more responsibility for delivery of its own packages.

UPS (NYSE:UPS), and to a lesser extent FedEx (NYSE:FDX), ran into a perfect storm of poor weather conditions during the peak delivery period just as a lack of logistical planning collided with unrealistic expectations set by the retailers themselves, who offered cheap or free delivery right up to the last possible minute. Big Brown ended up with a horrendous 83% on-time delivery success rate, while FedEx was hardly better at 90%.

It was left to Amazon, though, to refund shipping costs to irate customers and hand out $20 gift certificates as compensation.

Even though both carriers bounced back last year with 98% on-time delivery success, Amazon apparently vowed "never again" and began taking matters into its own hands -- and with good reason. Shipping is a huge expense for the e-commerce site. In just the fourth quarter of 2014 alone, Amazon spent $3.05 billion on worldwide shipping costs, a 30% increase over the prior year's expense, and those costs are up another 30% over the first nine months of 2015. 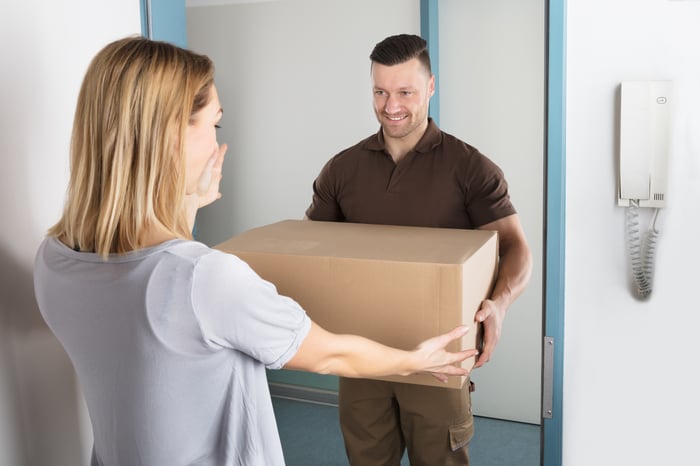 Taking care of business
Since the yuletide debacle, however, the e-commerce retailer has undertaken a number of initiatives to improve its fulfillment infrastructure while at the same time reducing its reliance upon the Big Two delivery services. In addition to utilizing third parties to a greater degree, Amazon has also used its dozens of distribution centers located all across the country to get its packages closer to the customer for final-mile delivery, experimented with drone delivery, tested an Uber-like app that would pay people to drive a package to a location they're already going, allowed some third-party sellers to ship directly to customers instead of going through Amazon's in-house processing centers, and even tried out its own in-house delivery service.

Yet despite all of these travel routes, Amazon still relies heavily upon UPS, FedEx, and the Postal Service for the bulk of its package delivery needs, because profitably scaling up such logistics-intensive services isn't easy. It's estimated that Amazon runs about 35% of its packages through the U.S. Postal Service, 30% through UPS, and around 17% through FedEx. Regional shippers account for around 18% of the total.

A few years ago, it was said Amazon seriously considered making a bid for FedEx as a means of buying into an existing business, and though that obviously didn't pan out, now it's being rumored that Amazon may actually be launching a rival air cargo operation of its own that will take flight in 2016.

Walk this way
Operating out of Wilmington Air Park in Ohio under the codename "Aerosmith," a secretive pilot program is apparently putting a new airborne delivery network through its paces under the auspices of Air Transport Services Group (NASDAQ:ATSG), which will neither confirm nor deny who the customer is that it's working with.

According to Vice, the unnamed company contracted four Boeing 767s to run the operation. While UPS, FedEx, DHL, and even Pepsi were speculated as the mystery customer, Amazon has been cited as the primary suspect, if for no other reason than all the carriers have confirmed to Vice it is not them.

Amazon, on the other hand, was apparently more cagey in its response, telling the site's Motherboard blog, "We've long utilized air capacity through a variety of great partners to transport packages and we expect that to continue."

While it would be a big deal if it was Amazon launching its own logistics network, it might not be a problem for the bottom lines of either UPS or FedEx.

How big is big?
According to their financial reports, UPS generated some $58 billion in revenues over the past 12 months while FedEx had $48 billion. In comparison, Amazon's total shipping costs for the past year were $10.4 billion. If the percentages above for service utilization still hold, the e-commerce site is only responsible for around 5% of UPS's revenues and less than 4% at FedEx. No doubt they'd hate to lose such a consistent customer, but it won't break them -- at least not right away.

It would only become a concern if Aerosmith proves to be a very efficient operation, and Amazon chose to offer its services to other shippers. It's not an unrealistic assumption, particularly if it meant the planes were flying at full capacity (assuming Amazon's own orders wouldn't be enough). In that scenario, it could lure customers away from the Big Two, but investors needn't worry yet since this operation hasn't even gone airborne yet.

Is Amazon.com About to Take on FedEx and UPS? @themotleyfool #stocks $AMZN $FDX $UPS $ATSG $PEP Next Article
Current