Given the struggles that MannKind (NASDAQ:MNKD) has faced since launching Afrezza, its inhaled insulin diabetes treatment, the company's management team has begun to (somewhat desperately) refocus its attention on finding new product candidates that may be able to utilize its Technosphere technology.

On MannKind's early November earnings call, Hakan Edstrom (who stepped down as CEO later that month) made it clear that the company is actively seeking a partner. He also let investors know it could be on the verge of making an announcement, stating:

[W]e've had discussions with potential partners, however, there [are] still negotiations to be had. So I would say, I would hope that we could possibly announce something before the end of the year or within the next quarter.

If MannKind does announce a new partnership deal soon, that should help to distract investors' attention away from the trouble that it has had with Afrezza -- a drug which it partnered with French pharma giant Sanofi (NASDAQ:SNY) to bring to market.

Hunting for a[nother] partner
MannKind is making a serious effort to get its new program started and recently hired a new chief medical officer to begin the initial development. Management has indicated that it is already moving ahead with the formulation work on a compound that could be used to treat pulmonary hypertension. Beyond that, the company has another dozen or so projects that may hold commercial potential, and it's actively looking for more.

Edstrom went so far as to devote time on the conference call to market the idea, saying:

[T]o the participants listening to this call who have an interest in sharing the risk and the rewards of our product development effort, or who have a formulation or dry delivery challenge that our technology may address, I would say this: Let's talk.

But is it too little, too late?
While the announcement of a deal would likely gives shares a short-term pop, it would be quite a long shot to bet that such a deal would be able to right the ship. Edstrom confirmed that all of MannKind's potential drugs are still firmly in the pre-clinical stage, stating:

I would say they are certainly months away from going into a clinic. I mean, they are in the formulation stage right now, particularly on the pulmonary hypertension.

Pre-clinical drug testing requires a lot of time, comes with a huge failure rate, and, even if all goes perfectly, costs a lot of money. MannKind is in short supply of both time and money right now, which means it would need to ask any potential partner to bear a significant portion of the development costs. It's likely that MannKind would also ask for an up-front payment to get any program rolling, given that its cash position is so tight right now that that it has been forced to lay off staff.

When it gets down to it, that simply might be asking for too much. After all, any potential partner would have to be willing to overlook what a loser Afrezza has been for Sanofi. Sanofi threw a lot of resources into the treatment's debut to try to make it a success, and was even willing to finance MannKind's portion of the up-front losses related to the launch. If Sanofi had it all to do over, you can bet it would structure the deal differently.

Cash is getting tight
MannKind's finances continue to look bleak. Its cash position stood at $32.9 million as of September, down substantially from the $107.2 million it had on its books a year earlier. The company currently owes Sanofi more than $43 million related to losses from the Afrezza launch, and that number is bound to keep growing in the coming quarters.

Tapping the equity markets for cash isn't a great option either. U.S. investors are so unhappy with the company's performance that its management team recently chose to raise capital by listing its shares on Israeli exchanges.

After all, would you be willing to put money to work in a company with this 10-year track record? 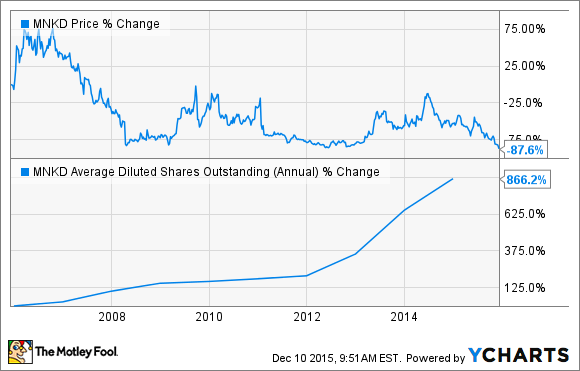 This hail mary isn't likely to succeed
Given its spotty history, dwindling financial position and recent CEO departure, I have a hard time seeing any potential partner being willing to answer MannKind's calls for help. It could be game over for this once promising growth story.